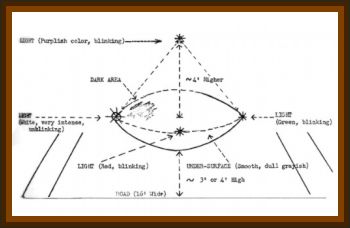 Early in the morning a Hungarian refugee, was driving home from a late work shift near Vicksburg, Michigan.

When he reached the crest of a hill he saw a cluster of lights on the road ahead which he assumed was an ambulance at an accident.

He slowed and approached cautiously. When within about 10' of the lights, he realized that they were not on any recognizable vehicle.

Instead they were seen to be on a disk shaped object hovering a few feet above the road and blocking his passage.

Brilliant lights from the object, some steady and some blinking, concealed some details of the object. Udvardy became frightened and tried to back away from the strange object.

At that moment his car was buffeted violently as if by strong gusts of wind. Then he saw what he first thought was another object hovering behind his car, but a quick glance ahead slowed that the object was no longer on the road ahead. Apparently it had darted overhead and taken a new position behind him. The same pattern of lights was visible on the object.

Udvardy then realized that his motor had stalled. It is not known whether this was due to electro magnetic interference as reported in many cases, but he could easily have stalled the car in the excitement of the moment.

He rolled down his window and looked out. For the first time he heard a low humming sound like a swarm of bees. Moments later, the UFO rose abruptly and sped off at a steep angle, disappearing in the eastern sky.

Having experienced Communist terrorism and other violence in his native country, Udvardy told the NICAP investigator, he did not scare easily.

But this encounter with something unknown had shaken him. The incident probably lasted less than a minute, but, for many minutes Udvardy sat in the car regaining his composure before he was able to drive home.

At his wife’s urging he reported the experience to the Kalamazoo Sheriff’s office.

He later became somewhat bitter over the ridicule his report evoked. However, he stuck to his story in the face of skepticism though he had nothing to gain from it.