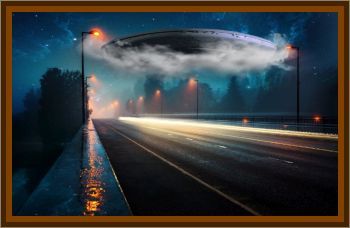 At 2:00 a.m. Gabriella Versacci was driving on the motorway and had just passed the Langford Budville, England exit. The híghway seemed completely deserted, but she saw the glare of a single headlight ahead of her that seemed to be stationary. As she got closer she saw that it was too bright to be a headlight. Her car suddenly began to lose powér. The headlights flickered, dimmed, and then cut out. Next the engine faltered, sputtered then fell silent.

Panic stricken, Mrs. Versacci pressed her face to the windshield struggling to steer the car to a halt in the almost complete dárkness. Thinking she could not stay there alone in the vehicle, she climbed out the car. She fumbled with the car hood as she lifted it, and as she stood there feeling helpless she noticed a humming sound, faint at first that seemed to be growing stronger. She could not see the source of the hum. As she stood facing the car a heavy hand came down on her shoulder and pushed her to the ground. She struggled to face her assailant and saw a tall, dárk colored metallic figure.

Gabriella then saw flickering multicolored lights and blacked out. When she came to she was standíng in a field. The robot like figure was standíng next to her, and before them stood a strange bright object. It was half moon shaped, rounded on top and flat on the bottom. It was silver gray in color and rested on thick legs, of which she saw two but there might have been more. It was about 20' in height and 40' across, and it had large, oblong windows in the middle from which yellow lights issued.

Gabriella now realized that the humming sound came from this object. She then blacked out for a second time. She awoke inside a strange room, it was circular, and she was strapped to a table in the center. She was naked but covered with a light blue blanket. Her wrists were bound to the table by what she described as large rubber bands. Her spread eagle legs were restrained in the same manner, with the bands holding her ankles to the cold surface of the table.

The inside of the craft was freezing. She glanced over to a far wall where the robot stood inactive. To her right was a console covered in buttons and dials. The floor was covered in what appeared to be black colored rubber matting. A few moments later, three men that came into view proved her. Two stood to the left of the table while the third went to the foot of the table and picked up some boxes or cubes. He placed three of the objects on a rail, which ran the length of the table, one by her head, one by her feet and one in the middle. As soon as the cubes were placed on the rail they began to glow.

The three men were all about the same height, 5' 6" to 5' 8" tall. Fair skinned and slim in build, they wore the same garments. All wore a skullcap, tied at the back of the head and ending just above the eyes. Facemasks covered the nose and mouth, so only the eyes and upper face were visible. No hair was visible, but she could make out the hair bumps under the caps. The eyes were more rounded than normal human eyes, and seemed emotionless. All three men wore a tunic with a gray colored edging, long gloves that went to the elbows and very long aprons that fell as far as their ankles. Thick soled boots covered their feet. Every piece of clothing was light blue in color.

Throughout the episode none of the man spoke or made any other noise. They looked at each other frequently, and nodded occasionally. Furthermore they did not appear to breathe, making no respiratory noises. During the examination none of the three beings touched Gabriella. The man at the bottom of the bed took a number of gray colored instruments, which he used one by one. A small knife like implement was used to take a nail paring from her right hand index finger. A blood sample was taken with a small plastic looking bottle with tubes and wires attached. Her blanket was removed and a thin pencil-like device was used to prod and probe her and a large black rubber suction device was used on the area around the groin. Soon the examiner placed another blanket over her, which provided badly needed warmth.

Noticing her frequent glances towards the now inactive robot, the examiner now spoke to her in perfect Englísh. The robot was a trained retriever device. It did all the manual work outside the ship. It brought specimens for examination and study. It was merely a nonthinking intelligence that was programmed to do certain tasks. The examiner spoke in a deep male voice, although Gabriella could not see his mouth move beneath the mask. His eyes never blinked, not even once. His movements appeared practiced, deliberate and precise. When he completed his task, all three men left the room together.

After several minutes Gabriella caught sight of the robot again. A flashing purple colored light was coming from it. It did not move but remained by the wall.

Soon one of the men came into view from behind her and walked to the far end of the table. He lifted the end of the blanket form the bottom and stared at her body. At this point she felt something awful was going to happen, and Gabriella struggled with her bonds but could not free herself. The being took a small pin and placed it on her thígh. Gabriella stopped struggling immediately. The device caused numbness in every part of her body apart from her head. The being climbed slowly on the bottom of the bed and slowly and without emotion raped her. She felt discomfort but no pain. Soon the three men came into the room and released her from the table. Gabriella looked down on the floor to see her clothes before passing out one more time that night.

When she next regained consciousness Gabriella was standíng, fúlly clothed, next to her car in the deserted country road. Distraught, she drove home.