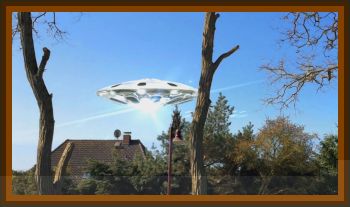 2 very good friends of mine, told me independently, of an incident that happened over 30 years ago but never told anyone, for obvious reasons.

In the late 1960s or early 1970s, my 2 friends were driving down Haror Dr., 4 lane divided road in a residential area of Venice.

It was after 11:00 p.m., the boys looked to their left, East, to see a flying saucer, metallic appearing craft approx. 30' in diameter, hovering over a house.

The boys stopped and watched as a bright blue beam shone down into the house. They stared in amazement while it just hovered for another 10 to 15 seconds then the beam went up into the craft as it shot off to the West, to the Gulf of Mexico which is only ¼ of a mile away, and disappeared in micro seconds.

They just drove off, didn’t say a word and about a mile down the road stopped the car, looked at each other and asked:

Did you see anything weird back there?

I didn’t learn about this story until a year ago, when I saw one of the witnesses Jim K. at a baseball game and somehow my involvement with MUFON came up and he said: >p>I saw one once, as a matter of fact I was with Alan D. ask him if you don’t believe me.

No Jim I believe you, I’ve known you guys for over 40 years, why didn’t you tell someone?

For fear of being ridiculed or being considered a kook, Jim replied.

I called Alan D. a few days later and told him that I saw Jim K. recently and he told me a very interesting story about you guys from years ago. Alan questioned:

You mean the UFO thing?

Yeah, would you mind sharing the experience with me?

Of course not, and he commenced telling me, almost verbatim, what happened that night in the beautiful city of Venice, FL.

What are UFOs? Where do they come from? What do they want? Why are they here?