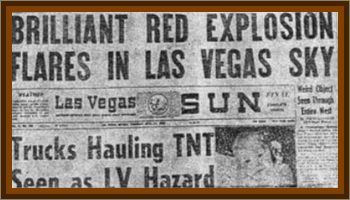 The military was already experiencing incidents with UFOs as they were building up to war in Vietnam. For example, in 1962, there was a UFO crash at Nellis Air Force Base in Las Vegas.

Initial reports stated that radar had tracked a fast moving object over Mesquite, near Las Vegas, but had lost contact after that.

Days later, witnesses started to come forward with their own stories of the incident.

Multiple people called the Las Vegas sheriff’s office to report odd lights in the sky. Near Las Vegas, other witnesses talked about seeing the object explode over the desert. Residents around the city led search teams into the desert to find the crash site.

In the end though, nobody ever found debris or evidence of a crashed object.

When the U.S. government ended their investigation, they noted that the radar contact was true, but there was no way to trust the visual sightings. Thus, the case was impossible to analyze.