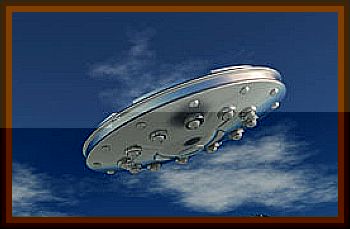 It was a late August, or early September weekend in the early 1980’s.

The time was around 7:00 p.m. and the sun was setting as Cynthia and her family were driving home from a camping trip at the Vedder River campsite, heading westbound on the Trans-Canada highway some 40 miles east of Vancouver, BC.

A large, round, dark object moving to the right hand side of the car suddenly interrupted their pleasant drive. Cynthia, who was at the time a teenager and in the back seat along with her brother and sister, had the sighting of a lifetime.

As the car sped down the freeway, and approached the relative position of the object, more details became discernible. It appeared to be a disk, with a shiny, metallic surface, no visible seams or separation from the domed top to the wider bottom. The dome had square like edges but also very rounded looking in appearance.

All the occupants of the car had a great view of the object, save the mother, driver, who was naturally paying attention to the traffic and the road. As the car approached the craft, the craft began to come closer, down to a distance of 400' from the roadside, and about 100' in the air, Cynthia used a windsock in order to determine the relative position of the craft, the windsock was about 400' from the side of the freeway.

The size of the craft appeared to be 30' to 40' in diameter, and tilted up towards the witnesses, showing its underside. The bottom of the object was very dark colored, it looked like very small squares like a vent. The outer seamless surface appeared to be spinning like a wheel, even though the bottom appeared to be not moving. There was no smoke, smell or sound emanating from the craft, nor did it affect the car’s engine performance in any way.

Since the mother and aunt, both in the front of the car, were familiar with UFO encounters they checked their watches to ensure that there was no missing time present. Then just as it had tilted, it began to move away from the car in a downward direction, in what appeared to be an attempt at landing.

Unfortunately since the car was in the left hand lane of the road, they were unable to stop in order to see the eventual outcome of the landing, although the witnesses believe it to be in a field nearby. Although there were 2 groups of people who did stop, the news and radio did not cover the event, and UFOBC did not receive any other reports on this sighting.

UFOBC is hoping to be able to locate the sighting area, and check with locals for any type of ramifications from the encounter, if they do recollect the incident, or any other sightings in the area. The gentle reader will be kept abreast of any new information as soon as it becomes available.

Upon reflecting further, Cynthia thought that this was a very odd place to stop, for the UFO. Was it a public display? Where they in trouble? The real freaky part was that it was going down.

Cynthia was asked to elaborate about the top of the craft appearing to be spinning and the bottom remaining stationary. She mentioned that you couldn’t actually see the spinning movement as there were no seams or anything that one could keep track of to perceive it. Rather, the reflections in the metal surface was as if there were horizontal streaks, either due to it spinning or alternatively that the metal itself was polished or streaked in that direction.

There does not appear to be any ill effects on the witnesses by the craft some 20 years after the fact. Indeed it has strengthened their belief in the UFO phenomena and to quote Cynthia: “I know what I saw – I saw a UFO!”.