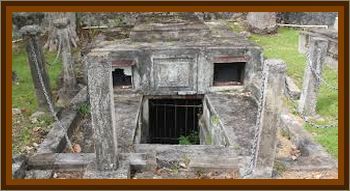 The Chase Vault was first built by The Honorable James Elliot, originally built in 1724 The vault was majestic, made of carved stone, coral, and concrete walls over two feet thick. At the entrance was an enormous blue slab of marble sealing the tomb in peace.

The first occupant of the vault was Elliot's wife, Elizabeth, who died on May 14th, 1792. A few years later, the vault was purchased by the Walrond Family and was opened to receive the body of Mrs. Thomasina Goddard however, upon removing the marble slab from the front of the door, the pallbearers were puzzled to observe that Mrs. Elliot and her coffin had completely disappeared.

The vault was then purchased by the Chase family when Mary Ann Chase died at the tender age of 2. The little girl was placed in the vault in a lead coffin along with the vault’s single other occupant who was interred in a wooden coffin.

In 1812 Mary Anne's older sister, Dorcas, died under what some would say was strange circumstances. It was rumored that the girl had been abused by her father, Colonel Thomas Chase, who had a reputation for being cruel and sadistic to his family and slaves. Some say that Dorcas was unable to live with the abuse any longer and starved herself to death. Her coffin was added to the vault.

Only a month later, Colonel Thomas Chase committed suicide and when the pallbearers opened the vault a grisly sight met them all. Inside the tomb, both of the little girl's coffins had been seemingly thrown about and were lying in a haphazard fashion on the vault's floor with one coffin left upside down.

There was no evidence of human tampering with the sealed vault, and none of the other vaults in the cemetery had been affected in the same way, eliminating the possibility of earthquake or flood.

Regardless, all of the coffins were placed back in their original places and Thomas’ was added to the orderly pile.

Four years later, the vault was once again opened to admit the body of eleven year old Charles Brewster Ames. Again, the coffins inside the tomb had been flung about, even the 240# lead coffin of the colonel.

This time, however, one coffin was not out of place, the wooden coffin of Thomasina Goddard. However, it had sustained heavy damage from another coffin smashing into it that Mrs. Goddard's skeleton was sticking out of it.

By now, the story had begun to spread around the island and 52 days later when Samuel Brewster was due to be buried, the vault was inspected from the outside for anything out of the ordinary. They found that the vault was airtight and watertight and that nothing could get in or out however, upon opening the tomb, once again they discovered that the coffins had been apparently violently disturbed.

Lord Combermere ordered that the vault be inspected and made impenetrable from the outside. He then ordered that sand by sprinkled on the floor so that footprints would betray any human or animal intruders. Finally, the governor's seal was placed into the fresh cement of the vault seal as an added precaution. This is the way that the vault remained for two years and, during those two years, the curious islanders who wanted to get a look at the infamous Chase Vault reported strange sounds and howls coming from within. The Chase Vault had garnered a very foreboding reputation.

It was time to open the vault and Lord Combermere with eight slaves, a group of able bodied men, and two masons made their way into the cemetery and towards the tomb. As hundreds of onlookers watched, Lord Combermere ordered an inspection of the vault from the outside. Nothing was deemed out of the ordinary or amiss, the vault was just as sturdy as it was when they first surveyed it.

The marble slab was removed and terror greeted Lord Combermere's eyes. The coffins were again violently disturbed and flung about like toys. One coffin was actually leaning up against the door making getting into the vault difficult. Mary Anna's lead coffin had been thrown so violently that a piece actually chipped off. There were no prints in the sand. No one had entered the vault.

By this time, the Chase family could take no more and had the coffins removed from the infamous vault. They were all eventually buried in plots in the cemetery.

Today the Chase Vault still exists, but it is empty and has been for almost two hundred years. No one has tempted fate by allowing a family member to be buried there.