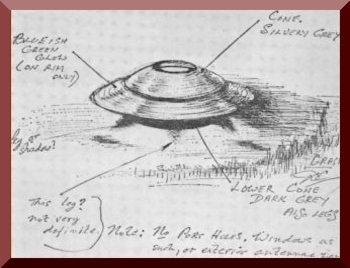 Dennis Crowe, a one time technical artist for English aircraft companies, would have the most unusual event of his life. A little after 5:00 p.m. He was strolling along the beach, located not far from his home. The sea had been rough that day, with high winds and frequent rain showers, and Crowe was enjoying a calm between the storms. In the distance, he began to see a glow, and as he moved closer, he could make out a disk shaped object, sitting on legs on the sandy beach.

He guessed the objects diameter at 20', and he could now see a glowing blue green hue rim around it, with the crafts 2 parts a dullish gray. The top appeared to be a transparent dome. The craft was sitting silently. The only sound he heard at the time was barking from some dogs. They were barking directly at the object. Crowe had made his first observations at several hundred feet, and as he came to within about 60', the object lifted itself from the ground. He could now hear a sound, a sound like air being forced out of a balloon.

The craft quickly climbed into the air, and within about 10 seconds, it had disappeared. The dogs were now silent. Crowe had been the only human to see the strange craft. He made a report of what he saw, and a geologist came to make an inspection of the landing site. He stated that some type of object had definitely rested where Crowe had seen the UFO. The plant life in the area of the landing was all dying.

This sighting gained enough publicity to bring in The RAAF. They offered a possible explanation for the event. They said that it could have been a tornado. Crowe categorically rejected this theory. For lack of more information, no other research was forthcoming on this strange sighting. Crowe stood by his account of what he saw that day, and no other evidence is available to deny his claims. The UFO that landed on Vaucluse Beach that day remains an unknown.