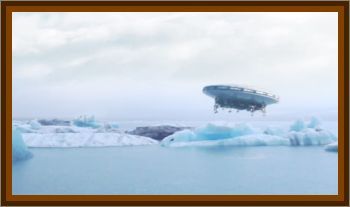 Three young men, all between 18 and 19 years of age, drove into a gravel pit approximately one mile east of the town of Vashon on Vashon Island between midnight and 1:00 a.m. on Sunday morning, February 18. They drove on an access road through heavy rain to a point where the road ended in a pond. They then made a U turn at the edge of the pond, and the car was stopped facing north on the access road.

After the car was stopped, all three observed a glowing object resting on a hill to the right of the car, or east.

The 3, Richard Frombach, Boone Powers, and Chris Beachner, described the thing as oval or crescent shaped and having a glow which they found difficult to describe adequately. A shiny type of glow, or reflected light, or a pale bluish white was the closest that the trio could come to a description.

At any rate, they drove into town to get additional witnesses.

Frombach did not return with them, but they picked up Joseph Frabush and returned to the area. Powers parked his car on the main road, and they walked into the pit area on the access road. Upon rounding the curve of the access road they observed the object which apparently had moved from its original position and was now on their left. Frabush later said that he thought the object was lens shaped, about the size of a compact station wagon, and made of shiny metal. He estimated the size of the object to be about 30'. He also had difficulty describing the quality of the light but insisted that it was reflected rather than generated by the object itself, despite the fact that there was no light source in the area.

Powers bolted immediately upon seeing the object the second time, and when Frabush and Beachner saw that he was gone, they also ran for the car, and the trio drove back into Vashon for more witnesses.

When more people crowded out to the gravel pit, the object was gone.

But something very strange had happened, the 100' pond located in the gravel pit was completely frozen over. The discovery was reported to Sheriff Don Holke at 2:00 a.m., and he went out to investigate the situation immediately. He was startled to find that the report was true, for temperature in the area was above freezing and had been so for several days prior to the sighting. There had been heavy rain in the area for a couple of weeks, and besides, there was no other ice in the vicinity.

Investigation showed that small puddles bordering the pond which should have frozen first if this were a normal freeze, had no ice whatsoever, and the mud was not frozen either. Another unusual feature of the pond was the fact that the ice was very dry, and it was raining during the whole episode.

Other details uncovered during subsequent investigation were that the ice on the pond measured as much as 3" thick in spots and that it was formed in layers ranging from two to five layers in quantity. The ice was also riddled with large numbers of bubbles containing air and dirt.

It was concluded that the possibility of a hoax was unlikely because of the size of the affected area of the pond.