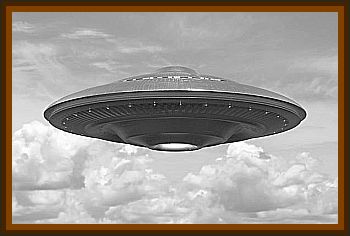 I certainly had my doubts.

Of all the UFO pictures I had seen, this was one of the more dubious. The object wasn’t even symmetrical. Dark as sin it hung over the town of Värnamo in the southern Swedish province of Småland. And nobody but a 15 year old boy had seen it.

It was around 11:00 a.m. Christer Sundström was lying in his bed, home from school with chickenpox. He was looking out the window of his room towards the neighbor’s house. All he could see was a dark grey sky.

But then the impossible happened. A dark object, which he at first thought was an eagle, started to circle above the roof of the neighbor’s house. Christer could watch it make its movements for half a minute before it disappeared behind the clouds.

After a short while it returned. This time it was much closer. Christer grabbed his pocket camera by the window and took 4 pictures in a quick sequence. Then the show was over.

Christer Sundström has since told his story to several ufologists and journalists. Many have doubted him. The saucer isn’t extraterrestrial enough. Boris Jungkvist, the foremost advocate of the spaceship hypothesis in Sweden, hasn’t mentioned the photo in any of his books.

The UFO organization of Gothenburg Gicoff, now no longer existing. did its best to reveal the photo as a hoax. Its photo investigator Gunnar Bunker examined the negatives and found a lighter area around the edges of the object. He interpreted this as proof that the UFO was made of cardboard and taped onto the window pane. He even took a series of similar pictures himself, that were published in the Gicoff newsletter.

Some 20 years later I drove my car to the parsonage of Tallnäs to visit Christer Sundström, who now had become a clergyman. I thought a lot about the hoax theory on the way to Småland. An older colleague of mine, Henry Svensson, met with Christer at the time and found him to be a serious young man with a Christian view of life. To Henry it was clear that he had no reason whatsoever to lie about this.

Christer Sundström greeted me with a firm handshake. He seemed calm and relaxed about my visit, though I disturbed him during a summer camp for children waiting to become confirmed.

Once 2 men from some UFO group tried to hypnotise me, but without success. Sometimes I myself doubt that the whole thing actually happened. But it would be strange if there wasn’t life somewhere else in the Universe.

I don’t think it’s a good idea to investigate these things. Not that the objects in themselves are evil, but the power behind them might be hostile. These phenomena have produced several cults and I don’t think that is good.

I asked him to tell me about the incident once again.

I was lying home in bed when I caught sight of a strange object through the window. It kind of circled in the sky. At first I thought it was a bird. It moved like an eagle. I watched it for maybe 90 seconds. It was quite far away, but I still found it strange. After a while I got out of bed and went up to the window. I brought the camera with me.

When the object got closer I took 5 pictures of it. Afterwards it turned out that 4 of the negatives were blank, but the fifth was good. The object then ascended and became smaller and smaller until it couldn’t be seen anymore.

I felt that this was something unexplainable, something that I couldn’t understand, something not built by humans. But I can’t say if it was a craft.

I didn’t tell anyone about the incident until the pictures had been developed. Than I talked to my parents. At first they laughed, but then my father found it interesting. He took my picture and through a friend of his the whole thing ended up in the local newspaper. Then gradually I started to doubt what I had seen. My friends at school laughed at me.

I already had my Christian faith at the time. I read the Bible a lot and tried to find the answer there.

Some people from Gothenburg examined my experience and came to the conclusion that it was a hoax. It made me very angry and disappointed. I to this day claim that the picture is genuine. But after the exposure I avoided looking up at the sky and I even tried to convince myself that somebody had pulled a joke on me.

A lot of people sent me books and phoned me up and wanted to talk to me. It was both UFO groups and people with a general interest in the subject. I asked my mother to throw the books away. I didn’t want to read them.

If I were to see anything like that again, I know what I would do, run and hide.

Christer Sundström made a very good impression on me. He told his story in a straightforward manner. He has never backed from or altered his original story and he claims that the photo is genuine. I’m sure that whatever Christer shot that day with his camera, it wasn’t a conscious bluff on his part.