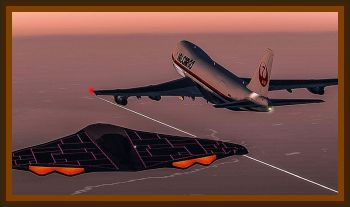 When a California Central Airliner left the Burbank/Hollywood airport at 7:55 p.m., neither captain nor copilot had any idea they were on a collision course with a UFO.

5 minutes after taking off for Oakland, the airliner was somewhere between Van Nuys and San Fernando, climbing at about 4,500'.

Then Captain Cecil Hardin called his copilot’s attention to a lighted object approaching head on. Copilot Jack Conroy would later tell reporters that the UFO was only in view for a few seconds before swerving to pass below the airliner.

It was impossible to say exactly how fast it was going, or how big and far away it was, but it appeared to be large, quite speedy and pretty close perhaps 500' away, said Conroy.

It was traveling at a terrific speed, said Hardin, and the thing that was really odd was that it didn’t appear to have any fuselage.

We also felt no propeller wash as the object passed under our left wing, said the Captain.

The copilot told reporters the next day that no plane could be expected to display lights in the manner reported by him and Captain Hardin.

For both of them had said the object appeared to be approximately 85' long, with 6 to 8 bright lights strung along the top, all of them blinking.