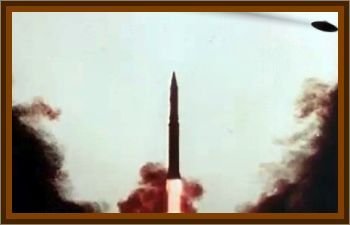 A crew of 120 military personnel at Vandenberg AFB prepared for the launch of at Atlas F missile. The launch took place as scheduled, however, at about 60 miles of altitude and traveling 11,000 to 14,000 MPH, the missile mysteriously malfunctioned and plunged into the Pacific Ocean. Dr. Robert Jacobs, then a lieutenant, was in charge of filming the missile launch with a telescopic camera hooked to a radar display that kept the viewfinder locked on the missile. The next day, his superiors called in Jacobs to view the film. To his shock, he observed a round object hovering next to the missile. Says Jacobs:

Jacobs was ordered to remain silent about what he saw. He dutifully kept silent for 17 years, before he finally went public with his story. Despite his sterling reputation, he was immediately attacked by arch skeptics/debunkers Phil Klass & James Oberg. He also received numerous death threats, lost his employment, and his mailbox was destroyed with skyrockets following another threat. Investigators, however, located Jacobs superior, Major Mansmann, who, on multiple occasions, confirmed the details of Jacobs account. This account is one of several in which UFOs have shown their capability to affect even our most advanced technology.