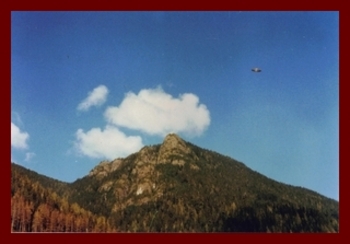 Mrs. Hannah McRoberts, aged 25, of Campbell River, BC, was with her family at a rest area some 30 miles to the north of Kelsey Bay on the east coast of Vancouver Island, from October 10 to 15, 1981.

During this 5 day period she says she took a number of pictures of her family and of the local scenery, using her 35 mm Mamiya camera with a 50-55 mm lens, 125 speed, and ASA 100 film.

At one point during the holiday they observed that one of the mountain peaks was surmounted by a cloud somewhat suggestive, as they described it, of a volcano issuing steam, so Mrs. McRoberts snapped that as well.

None of the party noticed anything else in the air at the time, and the presence of the UFO was therefore only discovered by them when the prints and negatives came back to them after processing.

The resulting photograph shows an object to the right of and above the peak and the plume of cloud. This photo came to the attention of Mr. David A.C. Powell of Vancouver, who is on the staff of the McMilllan Planetarium in that city, who in turn contacted Bill Allan and provided him with an enlargement, and also got in contact the APRO of Tucson, AZ, the respected American UFO investigation group who claim now to be the oldest in the world.

In the meantime, Mr. W.K. Allan was able to speak with Mrs. Hannah McRoberts and to interview her on CKOV Kelowna open line radio program, in the course of which he formed the opinion that her story was entirely genuine and that what we have here is therefore a legitimate classical type UFO photo.

The place where Mrs. McRoberts says she took her photograph lies incidentally, some 280 miles or so to the northwest of Mt. Rainier in the U.S. State of Washington, where, as readers will recall, Kenneth Arnold claimed on June 24, 1947 to have seen his famous flight of 9 saucers moving in formation at 1,200 mph and at an altitude of 10,000' over the Cascade Range.

Very wisely, in view of past experience, what a story there is to be told, one day, about the interceptions of UFO photos and UFO reports from the public mails, and all over the world. Mr. Allan had arranged that the negative of this photograph should remain very firmly in the hands of Mrs. McRoberts herself.

APRO had meanwhile passed their prints of the picture to one of their most eminent specialist consultants, Dr. James Harder, who is the Professor of Engineering in the University of California at Berkeley, and he and APRO agreed too that the negative should remain where it was.

Here in Britain we passed our copies of the prints to FSR’s photographic consultant Mr. Percy Hennell, who is generally regarded as the leading expert in this country in all matters where color photography is concerned.

After careful scrutiny, Mr. Hennell informs us that he would naturally have preferred to have the actual negative in hand for, as he warns, all kinds of hoaxes are possible, and do occur.

Nevertheless, he says that he finds nothing dubious or suspicious about the picture, though he does warn us that, if the picture is indeed genuine, then the disc must have been of enormous size, several hundreds of feet wide, to have shown up so large at such a distance. There have been frequent reports, over the years, of disks estimated to be of such sizes, indeed in some cases of disks believed to be as much as 1000' in diameter, as for example in the confidential report which APRO published a good many years ago, and which they had received direct from the pilot and co-pilot of an American troop carrying plane which, while en route from Tokyo to South Vietnam with a party of American soldiers, encountered 2 enormous metallic disks that flew on a parallel course with them for half an hour.

We now see, from APRO Bulletin, Vol. 30, No. 12, that Dr. James Harder submitted his report on the photo on November 4, 1982, and they give their own conclusion, which is as follows:

All this considered, the photo presented here appears to be an excellent and probably genuine photo of a classical disk photographed in daylight. Although unlikely, if further information and clarification is available, it will be presented in a future issue of the Bulletin.

In view of the obviously very great interest which this photo will evoke, I take the liberty of quoting in full Dr. Harder’s opinion as given in APRO Bulletin Vol. 30, No. 12:

Generally I feel that the best test of authenticity is in the good reputation of the photographer, insofar as it is impossible to prove a negative, in this case that there is no possibility of a fraud. However, some of the indicators of an authentic photograph can help establish likelihood of an authentic photo. These are:

1. That the negative involved is one of a sequence of outdoor pictures and that the frame in question is not an isolated one. One way of producing a hoax is to re-photograph a positive print onto which has pasted an addition. To do a good job of hoaxing then one would have to re-photograph an entire roll of negative film.

2. That there are no inconsistencies in the lighting of the strange object and the rest of he scene. In the subject photo, I note that the shadows in the lower left of the scene indicate a Sun position nearly behind the camera. There is a reflection on the forward face of the UFO that is consistent with this Sun position. There also seems to be a bright spot under the UFO not connected with external lighting, maybe a light on the UFO.

3. With the right equipment, it is possible to make certain measurements of negative density of the UFO image and of other images of objects at estimated distances from the lens. Here the object is to show that the unknown is not nearby, and thus not a hubcap or other such object thrown into the air. The idea is to measure, from the image of the object at a known distance, the atmospheric extinction coefficient. On a clear day, with a low value, contrasts between dark shadowed areas and brightly lit areas retain their distinction over greater distances. On hazy days, the light and dark areas blend towards a midrange shade, giving the appearance that distant mountains have of being one shade of grey. Nearby shadows can show their true darkness, as opposed to the lighter shade of distant shadows. But in this picture there are no nearby shadows to serve as a standard, only shadows of trees in the lower left bottom.

It has been alleged that edges become fuzzy at greater distances and that this can help distinguish nearby objects from those far away. I know of no theoretical reason for this based on the optical properties of the atmosphere, but will ask Jim Lorenzen if we have a consultant who could be more sure of this. After all, we do take remarkably clear pictures from space with no trouble from edge blurring of objects on the ground, and that is through 14.7 lbs per square inch of air in the path.

So proving authenticity is likely to be elusive, insofar as there is only the evidence of internal consistency to go on. I wish I could be more positive, but then there is so much evidence of other sorts for the reality of UFOs that we shouldn’t have to add to it excepting for those who are beyond believing anyway.

In a further letter from Mr. W.K. Allan, he comments on Dr. Harder’s reference to the fact that Mrs. McRoberts photo is one of a sequence of outdoor pictures, and says:

It is unfortunate that the importance of keeping the individual exposures on the roll unseparated was not fully realized, but when I saw the negative it was still unseparated from one of the family snaps.

With regard to the lady who took the photograph of this UFO, Mr. Allan goes on to say:

What is of great importance to me is the fact that Hannah McRoberts is the niece of one of Canada’s leading nuclear engineers, a man in charge of a multi billion dollar electrical generating complex, whom I have known continuously since his attendance in my class at Western Canada High School in Calgary, Alberta.