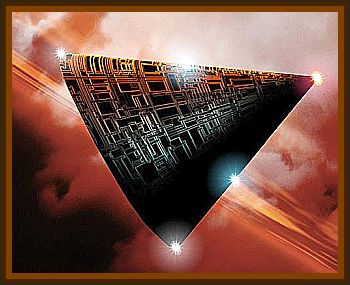 The following is an excerpt from the testimony of Mr. Nunn:

The night sky was bright and clear with a full moon. My sighting occurred at approximately 3:30 a.m. but until I find the small cartoon that I drew at the time I will be unable to describe with any accuracy the date, beyond saying that it was sometime in the beginning of the year 2004.

I witnessed a dark triangle, with 3 soft red lights at each of its points, which, for whatever reason, would pulse brightly. It came up from behind the top of the apartment building across the alley and traveled over the course of the sighting left to right. This triangle was moving through the sky point up.

This maybe what first attracted my attention. There was no noise as I watched this triangle move slowly from the east to the west.

If I had to describe its movements, I would say it was meandered, slowly with no seeming purpose.