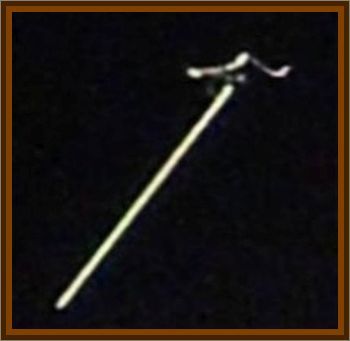 Five members of a Canadian Pacific Airlines flight reported that they saw a UFO during a regular flight from Lima, Peru, to Mexico City. The Captain, Robert Millbank, of Burnaby, B.C., said he saw two Beams Of Light during the flight and the other members of the crew gathered to watch.

It was getting bigger all the time, and at one point shot out a trail of sparks like a rocket. Then it seemed to be getting closer and we could see a string of lights between the two lights that were white. It then levelled off at our wing tip and, in the full moon, we could see a shape between the two lights which appeared thicker in the middle. He said the object remained a couple of minutes then disappeared behind the big passenger plane.