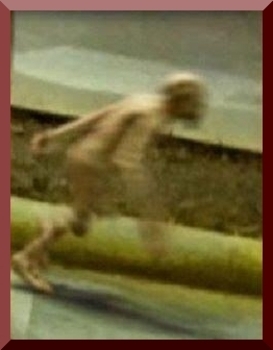 Officer Porfirio Antonio Andrade was on duty in the City Hall of Valencia when he heard a humming sound, and then the sound of light footsteps coming from the garage. As he gained the outdoors, he was confronted by a small man of about 4' in height, with a large head and bulging eyes which gave off a reddish light. It was wearing a silver colored coverall.

Andrade pointed his gun at the creature, whereupon he heard a voice which seemed to come from the area of the roof, and speaking in Spanish, it said:

Don’t do him any harm. We are here on a peaceful mission. He’ll do you no harm.

Looking up, the officer noted that the voice seemed to come from a disk shaped object hovering in mid air and wobbling from side to side. The little man on the ground then began talking to Andrade, repeating that he meant no harm, and that they wanted him to come as a guest to their world which was very distant and much larger than earth and which held many advantages for earthlings.

Thoroughly frightened, but nevertheless standing his ground, Andrade said that he couldn’t leave because he was on watch. The little fellow then assured him, still in perfect Spanish, that they would bring him back. Andrade restated his position that he could not leave his post. At that juncture, the little man lifted one foot, then the other, and somehow flew up into the air toward the object suspended above them. A door opened in the side of the disk and the creature sailed into it. The door then closed, white smoke with tongues of flames issued from the four exhaust tubes on the bottom, the humming noise started again, and the object left.