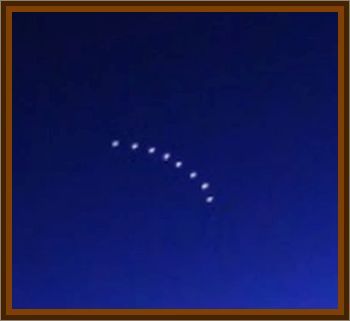 I was stationed at Utapao RTAFB in 1967 & 1968. I was assigned to MMS Preload which was on the east side of the base, just south of the bomb dump. We were surrounded by revetments which we used to climb up to smoke and take a break.

One night, I don't recall now the date but it was in the summer of 1968 around 1:00 a.m. while on one of these breaks someone spotted a series of lights off to the NNW. At first we thought it was returning B-52's but then someone reminded us that our returning aircraft normally came out of the North.

Incoming aircraft are easily identified and this was not aircraft. It was common to see aircraft stacked one behind the other and you could normally see the landing lights. In fact, you could distinguish between a B-52 or a KC-135 by the lights. On this occasion, the lights were lined up horizontally. As I recall there were 5 to 7 lights and they held a steady position for several minutes. Then, several would not be there, only to reappear at a different location.

Then several others would disappear and join the others. The lights appeared stationary other than when they would go off only to reappear. This pattern continued for about 20 minutes.

We had a base telephone mounted on a tree and one of the guys ran to the phone and asked the operator to connect him to the tower which was done. The person in the tower said they had no incoming aircraft, did not have anything on radar, and thought we might be seeing things. We were seeing things, these strange lights.

Others on base saw them and several inquiries were made but no explanation was ever provided.

This has haunted me for over 35 years and to this day I have no explanation other than:

IT WAS NOT AIRCRAFT.