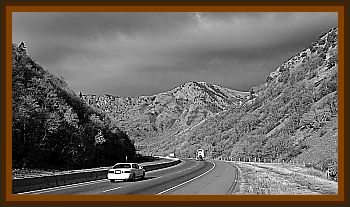 A 60 yearold UFO story from Northern Utah is making world news after the unveiling of a new FBI online database that opens up thousands of declassified documents.

This document, that has been available for at least a decade, though now easier to access, tells the story of three different Utah men who spotted a strange light and object above the mountains southwest of Logan.

Addressed to FBI Director J. Edgar Hoover, the information states that on April 5, 1949, a Logan police officer, a Utah Highway Patrol trooper in Mantua and an Army Supply Depot guard in Ogden all observed flashes of light followed by an aerial explosion and a falling silver object.

The depot guard said he saw an explosion in the air accompanied by a flash of light followed by the falling of a silver colored object.

The police officer reported seeing two puffs of smoke high in the air west of Logan, also followed by a falling silver object.

At about the same time a Utah Highway Patrolman at Mantua, UT, saw a silver colored object high up approaching the mountains at Sardine Canyon between Logan and Brigham City.

As the object neared the mountain it appeared to explode in a flash of fire.

Officials at Hill Field, now Hill Air Force Base, were notified about the incident and told FBI agents the sightings were likely caused by high altitude bombing practice.

Hill Field just now advised above phenomena probably caused by two UFOs from Wendover Field which are practice bombing in the desert west of Logan from extremely high altitudes which would cause vapor trails, the document states.

A news article in the April 6 edition of The Herald Journal quoted a University of Utah astronomer saying:

The mysterious balls of fire were nothing more than a meteor shower.

Before the meteor theory was advanced, police and sheriff's deputies throughout the area organized search parties to look for the things.

But they found nothing.