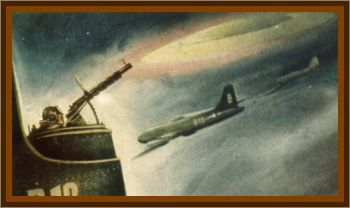 I was a member of the United States Air Force at the time that I saw nine flying disks. I dutifully reported my sighting to the Operations Section at Travis Air Force Base as had been directed by the Senior Officer. The pilot of our aircraft was also the officer in charge of the section that I was assigned to at the time. I was the Aircraft Distribution Officer of the Far East Air Materiel Command located in Fuchu, Japan in 1947. I had a project to take B-17 aircraft from the theater to Middletown Air Depot, Pennsylvania to have them modified to be air rescue aircraft. This involves such modification to accommodate a lifeboat attached the bomb bay which could be dropped for rescue at sea. I was assigned to one of these trips to observe the modification process. I became a passenger on the flight of a B-17 from Japan to the Middletown Air Depot. The crew picked up a modified B-17 aircraft (without the life boat) for return to Japan.

On that return flight I had positioned myself in the nose of the aircraft. As we approached Promontory Point, Utah at 15:30 hours, 16 July, 1947, I noticed several objects rising from the Salt Flats. At first I thought they were big white birds but they were coming towards our aircraft at such great speed that I became alarmed. However, in just a few moments they veered to the left of our aircraft, but close enough for me to identify them as nine round disks, approximately 40-60' in diameter with light blue underbellies. They were in what appeared to be a V formation of three, three, and three. They passed off the left wing of our aircraft in a climbing flight.

I immediately made my way to the cockpit to advise the pilot of my sighting. He had not seen them. However, the flight engineer, Technical Sergeant GJH (name withheld), Serial Number AFxxxxxxxx, did see them and confirmed my sighting. We only differed on one thing. T/SGT. H saw them as they were a little lower than our aircraft and he described the top of them as sand colored.

I had been in the Philippines Islands and Japan for approximately for 18 months and had not been aware of the UFO excitement in the States at that time. The weather over the sighting area was perfectly clear and there was no way that I could have been mistaken about what I had seen. I talk about this event to my friends and others that want to listen to my experience. Since there is so much reaction to stories of such sightings, I have never gone beyond just telling about the event. Also, I never had any further contact with T/SGT. H since he was assigned to a different organization than mine. I have kept the record of this event in my wallet all these years to make sure that the data was immediately available to me in the event someone wanted names and dates. I also put a copy of the data in my personal strongbox for safe keeping.

There is one thing that I regret about this event. I had just purchased a movie camera with a telephoto lens while in the States on this trip, and had it right in front of me at the time, and I did not think enough to take pictures of the sighting. However, on the other hand, the whole thing was over in just a few seconds and had I tried to take movies of it I may have missed the whole show. I thought this might be of interest to your readers.