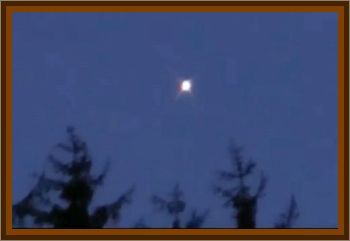 It was sighted on the island of St. Croix in the USVI. It was after dark, the skies were mostly clear save for a few small clouds.

The cloud the object vanished inside of was low enough in fact that its belly was illuminated by a parking lot’s light posts. The temperature was average for that time of year, in the low 70’s.

The craft was spotted by several students, including myself at the University of the Virgin Islands who thought it was initially a brilliant shooting star. But after a few minutes it seemed to be approaching the nearby Henry E Rohlsen airport. As it neared, its three lights could be seen pulsating between white and blue. When it veered inland and over the campus I remember my heart sunk into my stomach and I thought we were about to witness a passenger plane crash. It was too big to be a fighter as I stated in the report it was about 150' in length, about the size of a 727.

I had a friend who worked at the airport and I called him after it happened to ask if he had heard anything. He said the object was tracked for about four minutes on radar but disappeared completely after it passed over the college. Not only did it pass over the school but it did so directly over myself and the people I was standing outside with, close enough we could not only hear it’s engine, but feel the air being displaced by it.

The sound it made was unlike anything any of us had ever heard an aircraft make. It was a low thrumming bass sound that we felt more than heard and was offset by a mechanically rhythmic clink clink clinking. Not what I would have expected, it sounded more like a steam engine, than an advanced alien space ship.

Because it was so low to the ground it was lit quite well by the lights in the parking lot and I could see its surface looked fluid in nature and partially reflective. An interesting side note, this was only a month after 9/11 had occurred and the entire island had been locked down. All flights at the airport were grounded. An aircraft carrier was stationed a few miles off shore which meant all the islands inhabitants had gotten used to seeing military aircraft.

The reason for all this security was not that the U.S. Government cared about the people of St. Croix but because the island happens to be home to the largest oil refinery in the Western Hemisphere, Hovensa. At that time the refinery produced nearly 70% of the U.S. Military’s aviation fuel and therefore its security was of the utmost importance to our leaders. The U.S. Navy also has an underwater Tracking Range Facility located on the west coast of St. Croix whose operations are mostly classified. Though I don’t have any reason to suspect anything sinister takes place there.

The UFO sighting on October 11th was not the only bizarre occurrence to take place during that time. Many locals reported seeing black unmarked helicopters typically flying in formations of three or four cruising at deck level. One particular morning about a week after the terrorist attacks my roommates and I were awoken from our beds by these craft as they flew so close to the ground we thought they were trying to land on the campus. The sun was up and we could easily identify the helicopters as UH-1 Iroquois. There were no markings or insignias of any kind on the tail or any other part of the fuselage and the windows looked darker than they should have been, possibly tinted. There were also dozens of missing person cases filed, including one of my professors who vanished after 9/11. Though most likely coincidence, all these things struck me as profoundly disturbing.

I left the island a few months later and have not returned. I have also subsequently lost contact with the other witnesses. I have only shared this story with a few members of my family and my girlfriend. I feel like I won the lottery that night, it was both exciting but sad because I doubt I will ever have the chance to witness something so fantastic again in my lifetime. It is something I will never forget and has forever changed the way I look at the night sky.