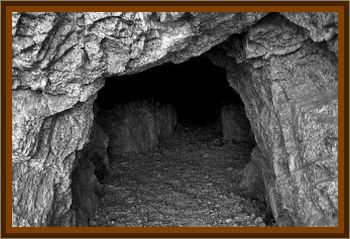 The author was working the night shift for Conoco Oil Co. at an open pit uranium mine west of Karnes City. He was one of 6 people operating Caterpillar 657B earth movers. They were down to about 210' deep when this incident happened. It was about 11:10 p.m., just after shift change.

They were getting ready to crank our machines, when the 85 acre pit lit up as if it was daylight. The light was so bright that the men had to squint because it hurt their eyes. The men remember hearing a high pitched hissing noise and the hair on some of the crew arms stood on end. We were so scared, we fell to the ground and started praying, and remember trying to look up, but the light was so bright we couldn't. After about 2 minutes, the light started getting dimmer and all of us could finally look up at it. What the group saw amazed us. The object was round and the bright light was coming from the center of the bottom of the object. Around the perimeter of the craft was hundreds of penlight size light beams that alternated in all colors of the spectrum. Now we know they were laser beams. The craft was rising up slowly at first and then went straight up, and out of sight in about 10 seconds. Some of us were crying, and some were shaking. The other shift workers thought we were crazy when we told them what had happened. But we got the last laugh. This is how we proved it actually happened. There is a vein of uranium ore that runs from George, West Texas to almost Texarkana, Texas. When determining where to place a mine, the following steps are taken:

1.) A geologist with a Geiger counter flies over the area and finds the highest radiation reading.

3.) The open pit mine is then laid out according to these core samples.