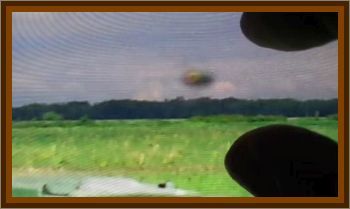 First, I am not sure of the exact date. I lived in Upper Glade, WV until I was 11 years old and I believe the year was 1956 or 1957. I was born in 1951. It was summer time but unsure of the exact date. My younger brother and I were standing in the road near our home, rural area. Jets would sometimes fly over our home and break the sound barrier early in the mornings and I had the habit of watching for jets during the daytime.

On this occasion I heard a slight whirring noise in the distance. I saw a very small silver object. I knew that jets usually left a jet trail and the jets would usually fly ahead of the jet noise. The object was moving horizontally and then turned toward me. I watched as it got closer and closer and it finally parked itself in the air slightly above and in front of me. It was maybe 100' above me. It wasn't directly above me because I could see the top as well. It was a circular disk with a smaller dome on it with square windows around the dome. It was a metallic silver in color.

I don't know if anyone was in the windows because they were dark. The disk was maybe 50' across or a little bigger and about 25' high. It sat there suspended in midair and not making a sound. After a short time it moved on slowly following the same path that the jets flew, over our home.

I thought that my brother John was with me but for years I told very few people about this experience and didn't mention it to him later as adults but eventually told my sister. She said that my brother Kevin had told her the same story. I was mistaken about who was with me that day but it verified my story.