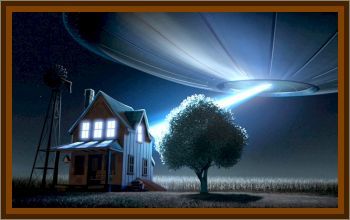 In 1989, at a UFO and UFO abduction conference in Laramie, WY, a woman reported that she had been abducted by a UFO from their farm in North Platte, NE.

The woman, Joyce Updike, said the abduction occurred after a UFO landed in her family’s farmyard in 1959 and again in 1967 but that she had no memory of it until she went under regressive hypnosis.

She claimed the hypnosis revealed the 1967 abduction was her second. The first, was in 1959 when she drove her little red Rambler station wagon to one of their pastures. She said it was there she met two space people. She said she was embarassed because she was barefooted and, in 1959, women were not supposed to leave their houses like that. She said she also was wearing an apron, another no no.

Joyce said the encounters changed her profoundly and she realized people thought she started acting a little goofy, but never understood why until the hypnosis.

She recounted that the space people were peaceful. She said they wore space suit like outfits, thick soled shoes and one of the men held two metal rods that he aimed at her while the other climbed over a nearby wire fence and walked to a landed object, partly hidden by a hill.

Updike said she then found herself inside the object on top of an examining table, two men of average height and well built stood next to her, another man wearing a three piece loose fitting surgical outfit with a hood and a smoke colored visor over the eyes, stood by a circular, glass covered instrument panel, and he also wore gauntlet gloves with pointed pincer type clamps. This man approached her, raised her right arm by the elbow, at this point all conscious recall ended.

Updike said that she learned that under any circumstances, she could no longer trust time and that the space people had a plan.