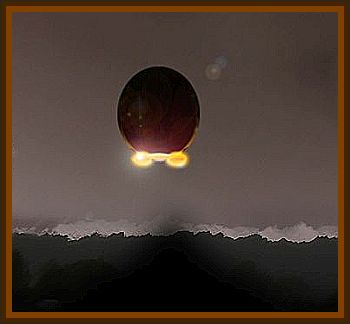 Unexplained object seen on a clear fall night by a reputable person.

This encounter has been related to me many times by my mother since it happened in the fall of 1957 or 1958.

For the record, she has never been diagnosed with any sort of mental illness, and is not a drinker. She is well respected to this day in the community, and has numerous friends who would testify to her honesty and sobriety.

In October of 1957 or 1958, my older sister, who would have been about 11 or 12 at the time, woke up in the middle of the night sick, and called for mother. My mother heard her, and when she got up out of bed, she saw from the window a glowing orange disk or saucer shaped object hovering over our yard, very close to the house.

We live in the country, and the night was clear, cool, with a light breeze. As she approached the window to get a better look, she noticed what she has called indentations on the edge of the object.

To describe what happened next would be the really unusual aspect of this report. She got the very distinct mental impression that they, her words, meant her no harm, and was told not to fear this event.

After watching the object for an undetermined amount of time, it went straight up at an extremely high rate of speed until it was no longer visible. There were no sounds heard.

I have often wondered what may have happened to her during the time my sister called from her room, because she has said it took mother forever to come to her. She actually didn't tell us about this until a few weeks later, but there is no denying the fact she believes what she saw.

Another incident happened in March of 2000 near here, when a fireball crashed into some woods and fields close to the county line. Second hand reports indicate a fire so hot it melted paint off the sheriff's vehicle at a distance of over one mile away. Unmarked vehicles were seen for a few days afterwards, and the locals were not allowed to see what happened.

After all these years, I believe it's time this report was seen by more than just family members.