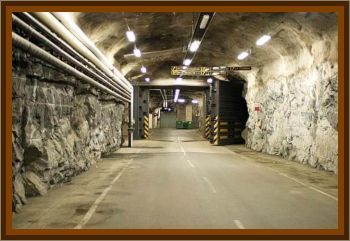 The witness was employed by the Air Force as a photographer. One day he received unexpected news that his security clearance had been upgraded. A few weeks later, he and another military photographer were flown for a temporary duty assignment to Norton Air Force base. As they landed they were taken on a two hour drive inside an Air Force vehicle with blacked out windows. They finally arrived at their destination, which turned out to be inside an underground installation.

They were ordered to disrobe and given white smocks to wear. The main witness was taken to a room, which contained a disk shaped craft suspended in a heavy net hanging from a large crane. The disk was about 30' in diameter and had a small opening on the side.

The witness was lifted up to the opening and put inside. He was shocked to see that the inside looked to be about 10 times the size of the outside. Disoriented he poked his head back outside to check the size which appeared to be about 35' in diameter.

He continued to photograph the inside of the disk and was later taken to photograph 2 actual alien bodies dressed in blue jumpsuits. Very little description of the alien beings was given other than they were of small stature, had smooth bluish skin and large football shaped eyes. One body had deep lacerations and missing tissue and appeared as if it was involved in an horrific accident. At that point, he became ill and the other photographer was called in to complete the assignment.