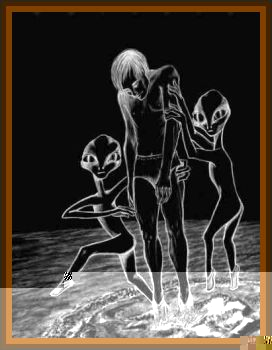 The barking of his dogs disturbed the witness.

He looked out the window and noticed high in the sky 3 incredible objects resembling flying skyscrapers. The objects were huge and brilliantly lit, the witness mentioned no sound.

He became scared and closed the window and pulled the curtains. Then the light in his room came on and he felt numb, unable to move. He then heard the back porch door open and a noise of someone going through the porch and to the bathroom, which led to his room.

He then saw the door open and a man came running in. He wore a blue gray jumpsuit and was about 5’ 10” tall, had black or dark brown short hair. He was of medium built, about 180#, very athletic looking, and wore black lace up combat boots that were bloused.

The man came to the bed and grabbed the witness by the shoulders lifting him up and at the same time yelling for help. The witness could not move or talk. And then the witness was let go and he dropped back, the man then looked toward the bathroom. He then looked back at the witness and said:

My God, they’re coming, they are here.

He stood at the foot of the witness bed. Then a bright yellow light came through the wall. It came right through the middle of the closet and was extremely bright.

2 tall figures walked out of the light through the wall. They were extremely thin and tall, almost 6½’ tall. Then 2 figures came through the direction of the bathroom. One was tall but the first one was about 5’ 4" tall and was apparently the leader.

The man next to the witness bed was trying to back away. Then the tall figure behind the short leader aimed something metal like a rifle at the man and a yellow straight beam came out of it, hitting the man straight in the face, he then fell on his back at the foot of the bed.

The witness managed to lift himself up enough to peer over to the man, and noticed that the skin of his face was burned away and his eyes looked like 2 white eye balls, he was apparently dead.

The witness became angry but could not move. The 3 tall humanoids had smooth gray skin. They wore tight fitting gray suits with hoods that covered the back of the neck and the sides but not the front. They had cat like eyes, with vertical pupils.

As the witness tried to look back at the man on the floor, the short figure made a motion and 2 of the tall humanoids went to him and picked him up and carried him right back through the light and the wall.

The short humanoid then walked over to the witness and touched his face on the right side of the nose and turned his head to face him. The being’s eyes were gray and the pupil’s dark. He lacked a nose and his mouth a slit. He never saw ears but there were lumps under the hood to indicate something was there.

He apparently peered into the witness eyes and said something that the witness heard inside his head, but does not remember what it was. The being’s eyes appeared very angry and serious. He then walked to the closet.

The witness could not move for at least 1 hour after the incident. He remembered that on the short being’s chest there was an emblem resembling a chevron with a snake with wings and snake like eyes.

His hand had 4 digits. The witness's family apparently slept throughout the whole ordeal.