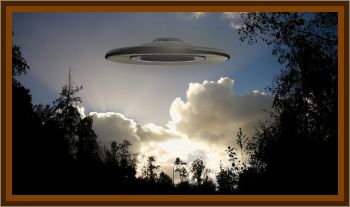 It was 2:30 p.m. on the eighth floor of a building on the Rua Gomes Carneiro, the front of which faces the hills which run parallel to the coastline. From this apartment, a large area between Praca G. Osorio and the spot where the tunnel comes out onto Rus R. Pomepia is visible.

Carlos Alberto do Nascimento, 14, the helper to Ugo Battaglia, 39, a radio technician, was standing by the window when he heard a high pitched sound which made the glass vibrate, and looking out the window, he saw a brilliant, metallic, disk shaped object which appeared to be landing just below the skyline among the trees opposite the building. One tree stood well above the others, and as the object passed over, it struck the tree and the leaves scattered about and the tree itself appeared to blow up. Settling close to the ground, the craft hovered and out of the bottom of the object came 3 whiteclad entities who proceeded to walk around it. Carlos excitedly called Mr. Battaglia to the window and the two watched the spectacle.

Both were struck with two strange characteristics of the 3 forms:

They walked around the object side by side, in a row.

Their arms hung down from their side as though made of lead, they did not swing as do the arms of a normal man.

The only disagreement between the two about the scene was that Carlos thought the clothing worn by the entities was white like the type worn by service station attendants, coveralls, but Battaglia said he thought they were yellow.

After about five minutes of the walking, the beings went under the disc, which continued to hover. Carlos noticed a spinning cupola with slat windows on top and a red light at both ends of the saucer shaped object underneath. The day was clear with perfect visibility. Their business at the apartment concluded, Battaglia and Carlos left the building at 2:55 p.m., and on their way to their shop at the corner of the street, they both looked up to the hill and saw that the UFO was still there.

When they reached the last corner near a square, they looked again and the object was gone. Upon arriving at their shop, Carlos and Mr. Battaglia told about their observation to another man in the shop and they all decided to visit the spot the next day. Their friend took a new camera along with him. At the scene of the landing, the three found the wild grass trampled or pushed down and the tree which Carlos had seen, appeared to have been wrenched apart, had no leaves on it, and the bare trunk looked burned and charred. The other trees in the area were perfectly normal. Samples of the bark and tree trunk were obtained and turned over for examination, but as usual, beyond the fact that they were burned, nothing was learned.

The men noted that the grass, which was very high, would have covered them completely had they tried to walk through it. However, Carlos and Ugo testified that the three entities they had seen were walking only knee deep in the grass, indicating that they were not, in fact, walking on the ground, but that by some means of locomotion, were moving about above the ground. Carlos, who had never put much stock in UFOs, was badly shaken by what he had seen and suffered from a severe headache, no doubt due to shock, for the rest of that day. Battaglia, on the other hand, had convinced himself that he had seen a helicopter until he talked with his colleague at the shop.

Another apparent witness had called the police station after having fainted at the sight of the object and its crew. This information was picked up from a local radio station and attempts were made to locate the witness, but to no avail.