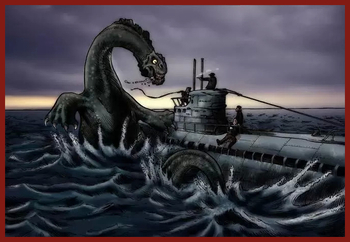 World War I German submarine UB-85, which folklore insists was disabled by a sea monster before the commander and his entire crew surrendered to the British patrol boat Coreopsis, while sailing off the Belfast Lough in Ireland, without firing a shot. The crewmembers of the Coreopsis were stunned by their discovery as they did not often come upon non aggressive German U-Boats, especially not in the middle of the day.

There are 2 sides to the story, It depends on which you prefer to believe in a coin flip.

If you chose Heads during the coin flip, here is the story:

Once on board the British patrol ship, the UB-85?s commander, Captain Gunther Krech, was interrogated immediately. One of the first questions asked by the British officers conducting the interrogation regarded the decision to remain on the surface even after the obviously British Coreopsis came within the UB-85?s line of sight.

According to Captain Krech, his U-Boat surfaced the night before in order to recharge the submarine?s batteries. Krech was on deck with some men and a few of his officers, getting some fresh air and having a smoke, when an abrupt surge rocked the ship and a heavy weight seemed to bring down the starboard bow. Out of the darkness of the night, what the captain referred to as, a strange beast climbed out of the ocean and onto the side of the U-Boat. The following is the description of the beast as told by Captain Krech to his British captors:

The proportions of the beast were so immense that it rocked the U-Boat and caused it to list greatly to the starboard side. Fearing that the ships open hatch would dip below the water line, which would subsequently flood the U-Boat and sink it, Captain Krech ordered his men to continue their barrage. The crew continued firing upon the beast until it finally released the forward guns and disappeared back into the night blackened ocean.

Krech noted that during the struggle the forward deck plating of the UB-85 had been damaged rendering the U-Boat incapable of submerging, the reason why the Coreopsis was able to catch the UB-85 at the surface.

The crews retelling of the encounter, along with that of the captains, was chronicled by members of the British Navy only hours after the U-Boat was found. The UB-85 was then cleared of any remaining crew that may have remained on board and sunk by the Coreopsis.

Today there remains no explanation that would adequately explain the events which resulted in the sinking of the UB-85 and the capture of her crew. There remains no physical evidence to suggest just what attacked the UB-85 on April 30, 1918, perhaps if the UB-85 could one day be found and examined, especially the reportedly damaged forward deck plating, we may be able to gain a better understand of the events which transpired.

The Tails side of the coin flip is:

The story of UB-85 is still being told and retold on websites focusing on alleged paranormal events, though one historian, and only one, believes it dates back not to the war but to a club armchair and too much pink gin in the 1920s.

It has been perpetuated by credulous journalists, said Innes McCartney, historian and marine archaeologist at Bournemouth University.

According to the yarn, Captain Günther Krech explained to his captors on April 30, 1918 that his vessel was cruising on the surface because he could not dive, due to damage caused by a strange beast that leaped out of the water. The monster had horns, small deep set eyes, glinting teeth, and was so heavy that when it scrambled up the side of the U-boat, the whole vessel listed sideways. It then viciously attacked the forward gun, chomping lumps out it. The damage forced the entire crew to surrender to the British patrol, the men were taken off and the submarine scuttled.

The wreck was found 350' down, off the coast of Stranraer, Scotland, during survey work on behalf of Scottish Power for the Western Link, an underwater cable which, at 239 miles long, will be the longest of its type in the world. The cable is a $1,300,000,000 joint venture with National Grid to take renewable power from Scotland to England.

From the murky scans and sonar images, McCartney says the submarine matches the description of UB-85, but could equally be its sister vessel, UB-22. This wreck lies roughly halfway between the recorded sites for the two submarines, but they were virtually indistinguishable apart from the painted letters and numbers, and it seems to me inconceivable that anyone would think it worthwhile to mount a dive to establish which it is.

Sea monster attack stories are surprisingly common, he said. You’ve got to remember that after the war the records were sealed, but there were all these people with some connection to British intelligence who yearned to boast of mighty deeds at sea but couldn’t tell the true stories. The true sea monsters of the first world war were the submarines themselves.

However, Gary Campbell, who keeps the Official Sightings Record for the Loch Ness Monster, there have allegedly been six so far in 2016, most recently in August, prefers to cling to the other explanation, that UB-85 was attacked by a sea monster.

The area of sea where the attack took place has a history of sea monster sightings, they have ranged from the north coast of Wales to Liverpool Bay, said Campbell. What the German captain said could well be true. It’s great to see how Nessie’s saltwater cousin clearly got involved in helping with the war effort, she even managed to do the damage without anyone being killed.

Peter Roper of Scottish Power is less convinced: I am probably on the side of the historians who believe that the capture of the vessel was more straightforward than a sea monster attack.‘A sea monster attacked my submarine is maybe one of the most fanciful excuses of all time. Thankfully we have had no monster related health and safety incidents in the project yet.