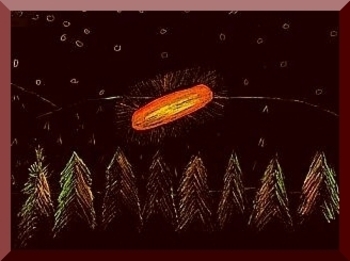 On or about July 2, 1950, at a family home at Twin Beaches, Coeur d’Alene Lake, ID, in the early afternoon, my aunt and uncle and I were sitting on the porch facing East, when over the mountains, across the lake, a brilliant long cigar shaped UFO, moving very fast, came into view.

We saw this for perhaps 5 to 10 seconds, at which it appeared to turn right, and in so doing, it revealed a circular view, which glowed a bright whitish yellow, perhaps magnesium flare type disk, and quickly went out of vision.

This was an awesome experience and is as clear in my mind today as it was then.

This occurrence was widely reported in Eastern Washington, all the way to Montana. The approach of this vehicle was so close, that the occupants of the airport control tower, located at Geiger Field at that time, were concerned for their safety.

The object was, to my recollection, clocked in Montana at 18,000 MPH.

I cannot recall hearing any substantiative follow ups on this event, though I am sure that the U.S. Air Force had nothing that could clock 18,000 MPH.

To follow up, I had The Spokesman-Review, our local newspaper, search their archives from July 1950 to 1952. Several reports were found, but one, dated July 3, 1950, was right on with my experience, except that this sighting was at night and ours was in the early afternoon.

I cannot tell you if our sighting was before or after the reported evening sighting. It appears, by virtue of the 12 hour lapse, to have been two separate events.

Incidentally, the distance from Spokane to Missoula, Montana is such that only a few seconds later, the viewing lag between spotting the UFO in Spokane and Missoula, would be about 14.5 seconds at 20,000 MPH, which is not far off from my recollection of 18,000 MPH.