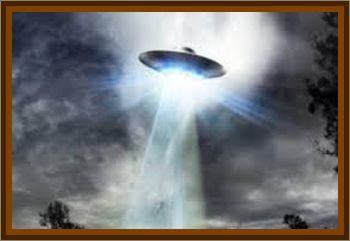 The Dunn County Sheriff's Department received a number of calls from the town of Menomonie, WI, complaining about unusual bright lights in the sky.

A deputy arrived a short while later and also reported unidentified lights" to the dispatcher. Menomonie is on Wisconsin Highway 29 approximately 186 miles northwest of Madison, the state capital.

Erin and I were traveling west on I-90/94, about 10 miles west of The Dells, when I began noticing three lights rotating in an oval shape pattern on some clouds to the right, north, of the highway. At first I thought it was just headlights from oncoming traffic on the windshield. So I asked my gal to roll her window down and to tell me what she saw at the base of those clouds. Neither Erin nor Mike could find the source of those mysterious sky lights on the darkened ground. For a while, they thought it might be a nighttime laser light show at The Dells, but then they weren't so sure.

Then it got really weird, Mike added, What appeared to be laser beams or long, thin green light rays began shooting outward from above the clouds and were giving the clouds a greenish glow every time the rays would shoot out. All of the rays came from the area of the original rotating lights, with the exception of a couple that came from some clouds over the highway.in front of us. The nearest town to the sighting area is Wisconsin Dells, WI. in Sauk County, approximately 45 miles north of Madison.