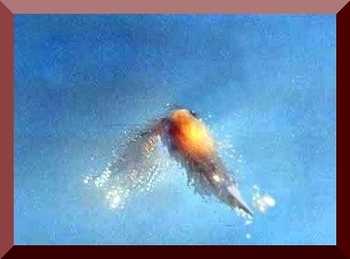 During the middle of last November, a group of three teen aged boys were having an outing on a cliff overlooking the Warrior River near Moundville.

The following is an account in the own words of an eyewitness, Stewart Lewis of Tuscaloosa, of what took place:

It was about 11:45 p.m. and a friend noticed a light. At first we thought it was an airplane, but then we noticed it was not making any noise and that it was too close. We watched It for a while and then got scared and jumped In the car and left.

Stewarts curiosity got the best of him however, and he and one of his companions of the first night, plus another youth went back to the same spot the following night. This time they took along a pair of binoculars in case anything showed up.

We got down there about 6:15 early in the evening. We sat there a good while and were getting kind of bored because we didn't see anything. We were just about ready to leave and one of them looked through them. The white light changed to red after it got above the trees and then turned a deep yellow.

And that is when I started looking with the binoculars.

What I saw then was beyond imagination. It was kind of a triangular shaped object with the shape of a pool rack. It had a deep yellow glow.

It seemed like it was thrown out of an explosion. It was tumbling, but was moving slowly on a line.

Stewart said there was no sound at all and the object was about treetop level.

We watched for a good five or 10 minutes and then it went eastward where we couldn't see It, Stewart said, It wasn't an airplane, helicopter or jet.

When people kidded me about it. I began to doubt it myself, but now I am sure I saw it.

Lewis said he has returned several times to the same spot on the rugged land near the river and has seen the object on more than one occasion. On his most recent trip last week, he didn't see anything.

Stewart, as were the witnesses in the Hayden Mountain case, is a level headed person not prone to inventing fantastic stories about flying saucers or little green men.