Grey Triangle With A Light 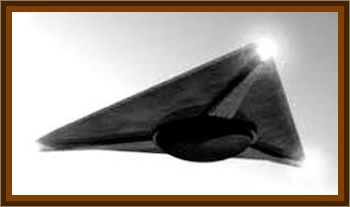 At 1:00 p.m.in a clear sky, a grey triangle with a light in the middle hovered over city for about 2 minutes, then disappeared in1second.

I was maybe 20 and I was driving home from my morning classes. I stopped at a red light just before a round piazza,where a tall monument stands. I decided to look up to take a good look at the monument. When I did, I was extremely shocked to see in the sky a stationary grey, metallic looking equilateral triangle with a very brilliant light in the exact center of the craft, so brilliant I remember thinking it looked like a mirror reflecting the sun.

The day was very clear.

The craft did not change position relative to the monument for at least 90 secs. The size to my eye was about 1 cm and it was at a position 30º south of the top of the monument. I could not believe my eyes. Many people were out and about,I looked to other drivers, but they did not see.

I was semiparalized by shock. I looked up again, and after a few more seconds the craft moved northeast and disappeared in about 1 second or the same time it took me to turn my head and see it disappear from my sight.

Right about then the light turned green. I have not mentioned this to too many people, just family and maybe four friends, because I feared ridicule. It was a very clear site and I cannot forget it. I do not exactly remember the date or year, but I was in my first years attending the University.

One of my sister' s friends was an Italian air force pilot and when I asked about UFOs, he said they saw them often and were instructed to pretend they were not there. He said the UFOs would tease the air force pilots by doing circles around them.

He was a very serious guy and he seemed to regret saying that much and never said more about it.