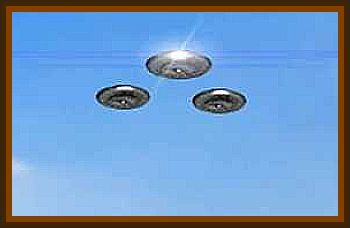 I was lying on the terrace with my brother and cousin watching the stars and talking.

My brother tells us to look at the plane lights coming from afar. They looked strange because we were used to a flashing light coming from planes.

Anyway, we kept looking at it until something hit us, there were 3 disks of orange light forming a triangle moving together, afterward we knew it was part of one huge saucer like shape. the lights were getting closer.

We started to freak out a little because the lights were getting bigger but we could not see the saucer as a whole. We got up, ran, and hid but still looking at the lights. The lights moved at a speed of 30 km/h when we saw them, and suddenly they zipped away like a shooting star.

We could not believe our eyes and started looking at each other trying to explain what has just happened. As I was really skeptical of everything that had to do with UFOs or paranormal, I had no answer to that. However, the next day on the Italian channel in the news, they announced that the Belgian Military Air Force detected a UFO and 2 F16s chased it. An amateur video was shown and there were the three lights we saw.