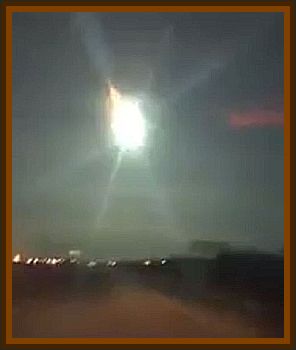 I was practicing night flying with my instructor and on an approach to Tulsa International Airport coming into N-S runway out of the south. We were in a Cessna 195 that has a the windshield extending over the back of the pilots head. There was a flash that cast a white light like a electro welding flash.

The air was filled with airline pilots asking what had happened. I was looking directly overhead at were the flash had occured. I saw a pin point of light going into a cloud as if a flash point had occured and was pulled into the main body of the occurence.

It was like a pin sticking out of a hotdog. The main body was at first white light that turned to green, to blue, to yellow, to orange, to red, to deep blood red and then to black.

The main body of the explosion roiled in such a manner to open and reveal the interior that was burning blood red. It would close and open in a different place until it finally disapeared. The end opposite the entry had a like needle of light which looked to me as the remainder of what was left of the object that had exploded had exited the main body.

This event was reported in the Tulsa World and Tribune. The article stated that the flash had been observed in Dallas and Kanas City. The event looked to be in outer space among the stars. It seemed to me that this event was caused by some object that was filled with an explosive fuel that had ignited and blown the object up, forming the lead in spike that expanded into a sausage shaped main body and then trailed the exit spike.

This happened in 1956 or 1957. I have never reported this event and didn't interrupt the airline pilots chatter with the Tulsa tower. I was new to flying and an airline pilot was not to be interrupted by a lowly private pilot. This event should be checkable through the local papers or the tower records at the Tulsa Internationa Airport, if they keep records that long.

My instructor later denied that he had seen anything, which didn't surprise me since he wore corrective glasses that were Coke bottle bottoms.

I did some very rough calculations this morning by drawing out the scenario on paper. The results were not promising. The event appears to have been no more than 10 to 20 miles above Tulsa. This would put it well within the capabilities of the armed forces even at that time, 1956 or 1957. It was probably some military craft blowing up, although it doesn't preclude something from further out.

All I can remember is it was sometime in 1956 or 1957. I've lost my log books long ago and have a miserable time with dates. The papers were full of the reports and as I said, the tower at Tulsa International, it was Tulsa Municipal back then I believe.

I tried once some years ago to find it at the Tulsa World and Tribune and was unsuccessful. I wonder if the weather bureau would have something on such an event? Or some astronomical group might have it. That's about all I can come up with. I'll try to find more if I can.

The event was way up there in the sky. The height could be figured by running a line from the center of the earth to Dallas, one to Tulsa and one to KC, then extending the Tulsa radius into space and making a tangent on the Dallas and KC radii. Where the two tangents intersected with the Tulsa radius would be the height of the event.