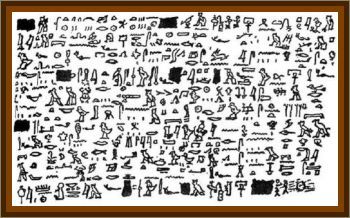 The image above is supposedly a reproduction of a papyrus from ancient Egypt dating probably from between 1504 and 1450 BCE.

It is obviously not a newspaper article in the modern meaning of the term but would be quite close to an equivalent of that time.

According to certain UFOlogists, the text would tell of the observations by the army of pharaoh Thutmes III of the arrival of numbers of circles of fire in the sky, on several occasions, specifying that these stationing circles had thereafter flown upwards in the sky.