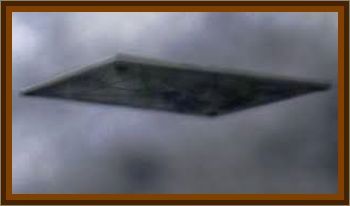 In 1988, I was taking my 10th flying lesson at Tullahoma Airport in TN. After 30 minutes of completing the flying lesson the instructor told me I could fly around for the next 30 minutes. As I was flying around practicing a turn, I noticed an object that was rectangle in shape, dull black, 60' to 70' long, altitude around 5,000' flying towards Normandy Lake.

I asked the instructor what it was and he said he did not know. I asked him since I had some time left in my flight could I get closer. He said yes go ahead. So I did. I was slightly above it in altitude and slightly faster than the craft.

Each minute I would get closer to the object. The whole time my instructor and I was asking each other, What Is That?

It glided a straight course and stayed the same altitude the whole time. After 20 minutes of flight the instructor said we had to go back to the airport because our time was running out and there was someone else that might take a lesson after I did. Before I turned around I noticed we were about a ¼ mile from it and about 500' above it in altitude. It made no sound, no exhaust, had no markings, and no change in flight.

It was an absorbent type of black, dull, no reflection at all, which got my attention. I was flying slightly faster than it was, as I gradually was catching up with it. When I turned around the last thing I saw was it was over Normandy Lake still heading north. I saw a reference close to there was the creek going by the Lake has, or had a horseshoe bend in the creek.

The flight back to the airport was quiet except for the instructor and I asking each other in a puzzling tone, What Is That?

After we landed we were securing the plane and again we keep asking the same question. When he was filling in my student pilot log book we talked about it again. It has been over 25 years since it happened. What was it? I had no ideal.

I still don’t. I have told the story over and over for the last 25 years, and yes I still wonder if I would have had 10 more minutes flying to observe it because all things being equal I would have been flying next to it.

It was as big or bigger than a tractor trailer rig, and flying in a horizontal position. It stayed on the same path the whole time. It had no wings, rudder, lights, cockpit, and engine exhaust from my view point. The sun was bright and there were no clouds in the sky, but there was no reflection of any kind at any time.

If I had just flown for another 10 minutes.