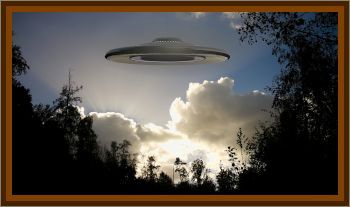 We often think that the alien abduction phenomenon began in 1961 with the abduction of Betty and Barney Hill. There's an abduction story that predates the Hills by several years in the happening, if not in the telling. It began in the Tujunga Canyons area, then a rather isolated wilderness area north of Los Angeles. In 1975, two women Jane Doe & Judy Doe, went to the NICAP UFO investigation organization, where they told a story of 23 years of UFO and alien abduction experiences. They had finally decided to tell their story, because abductions and missing time experiences had begun to appear in the media.

The experiences began for the 2 on that night when they, who lived together in an isolated cabin in the Tujunga area, were awakened by a bright light outside their cabin. A missing time loss of 2 hours also occurred, and the women were frightened enough to flee their cabin. The women were hypnotized separately by a clinical hypnotist and regressed to that night in 1953. Under hypnosis, Jane recalled thin humanoid creatures in black garments who came into their room through a closed window and took them to a Saturn shaped UFO hovering outside. Once inside the craft, they were examined and then were returned from the craft on a beam of light.

Judy was never able to see the beings. They were invisible to her, although she could feel their presence and was terrified. In later years she would be harassed by invisible creatures who wanted her to go with them to some unknown place. In 1956, Judy and another young woman named Joan Doe had another experience. One night as they were driving to their home in Tujunga with Joan's young son in the back seat asleep, they pulled off into a rest stop. They decided to sleep there for a time due to the late hour and because of heavy truck traffic on the highway. At some point, they were awakened by a bright light and found themselves paralyzed, unable to move. After several long minutes, Joan managed to move one finger, which seemed to break the paralysis for both. They turned and drove back down the mountain to a cafe to regain their composure.

Under regression hypnosis in 1975, Joan recalled two tall, thin entities clad in black who emerged from a bright craft that hovered nearby and circled the car. They seemed particularly interested in Joans son, asleep in the back seat. A 3rd entity then seemed to call the two to return to the craft, which they did. The craft took off at about the same time that Joan broke her paralysis. Once again, although she awoke and felt the paralysis and saw the light, Judy had not seen the beings. Later, Joan would be harassed by small white entities that wanted her to accompany them to an unknown place. In 1975, Joan was contacted by yet another pair of women, Lori Briggs & Jo Maine, who lived in a town nearby. Lori & Jo had also had an experience of being paralyzed with strange lights around them. Under hypnosis, Lori recalled being taken from her bed into a small room and being examined by strange thin beings that wanted her to go with them to an unknown place. Lori used a mental technique to resist them, and was returned immediately to her bed. Lori also recalled abduction experiences from her past, before she had met either Joan or Jo. Jo did not recall seeing any creatures, but she recalled seeing lights and a dome, and finding herself lying on some sort of platform.

Were these women really abducted? Five women, all in the Tujunga area, all involved in an alternative sexual lifestyle, and all friends or sharing common friends. Some of their descriptions of their experiences are very similar to sleep paralysis, waking up, feeling a presence, being unable to move until one manages to move a finger, at which point the paralysis vanishes. However, is sleep paralysis contagious? How common is it for two people sleeping beside each other to have sleep paralysis experiences at the same time? What are the odds against this happening to three pairs of friends?

For those who subscribe to the theory that the abduction phenomenon is due to stimulation of the brains temporal lobes by electromagnetic fields produced by tectonic stress in the Earths crust, it must be noted that there are a couple of major geological faults in the Tujunga area. However, one must ask how likely it is that these five women, and apparently no one else in the area, would be sensitive to such fields? In the 1956 incident, how is it that Joan & Jo had the experience while sleeping in the front seat of the car, while Joan's son, asleep in the back seat, apparently did not?