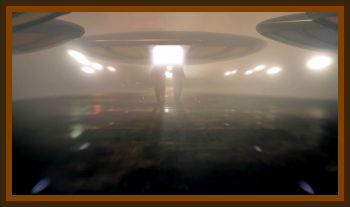 The witness was walking along a desert trail looking for interesting rocks when she noticed a ball of fire in the sky that descended and disappeared behind a nearby mountain ridge.

The witness walked towards the direction where the light had gone down & then stopped to pick up a sparkling rock when she noticed a small gray man walking towards her saying:

Do not be afraid.

The witness then apparently fell asleep. She woke up later lying on an examining table in a small room illuminated by a fuzzy light.

They pulled down an apparatus with a light from the ceiling and ran it up and down her body. A small device was apparently planted in her ear and one in her abdomen. She was also shown a book with strange symbols and a scene with stars in a large 3 dimensional viewing screen.