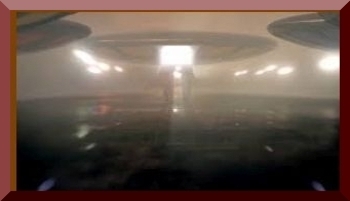 Howard Hann, Mr. Hubert & Tex Keahey saw a a very large bright, sausage shaped object, with no fins, wings or protuberances, travel from north east to south west, over a period of 12 minutes or so.

The object was shiny metallic and reflected the sun, and appeared to be revolving as it moved like the slow roll of an airplane.

There was no noise, nor was there exhaust or a vapor trail. There were no wings or engines or protuberances of any sort. It appeared to be traveling at 300 to 600 mph.

According to Dr. Maccabee this sighting on the day following the release of the Project Saucer report was a real challenge to the Grudge investigators. It did not appear near a military installation, but it was important because it was a daytime sighting..