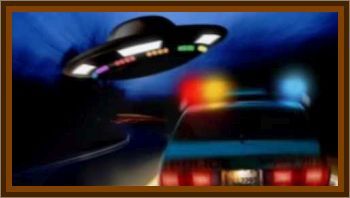 During the early hours, Trumbull County 911 in Youngstown, OH started receiving calls around midnight from residents saying that one or more unidentified flying objects had been sighted around several neighborhoods close to Youngstown.

The first actual call about the UFOs came into Liberty Townships' own dispatch office just before midnight. The first caller, a female, reported an object flying at a very low altitude close to her residence. It was after this when police units started reporting on the objects in several different townships.

One of the officers assigned to the call to find out what it was that was causing the disturbance stated: That after he had gotten through with talking to a gentleman that was walking his dog, this bright, white light appeared out of nowhere and completely turned off his patrol car's engine and radio.

That is when officers from at least three other townships sighted the objects flying at a low altitude. One officer even stated that he could clearly make out a structure above the flashing lights. This was accomplished with the use of high powered binoculars according to the officer that had described the object over the radio to the dispatcher. It was believed that it was only one unidentified flying object which was causing all of the ruckus. That was until an officer with Liberty Township climbed up to the top of an old radar site just outside of Cortland Township. This radar post was said to be the highest vantage point in Trumbull County. It was then that he realized that these were not any fixed wing aircraft or helicopter. When giving his account over the radio to the dispatcher, he clearly stated that he had four distinct colors flashing in front of him. Those colors were red, green, yellow, and blue and they were changing colors in tandem with each other. Now what is strange about this is that he also states that he sighted aircraft taking off from the National Guard base in Vienna.

Possibly, these craft were scrambled to go and check to see what exactly was being sighted by these officers and the general public.

It was after the first call that authorities at the Air National Guard base in Vienna, OH was notified of the occurances. When contacted, the base stated that they did not have any known flights that would have been in the area of Youngstown at the time. When the first reports started to come in, the dispatcher on duty was told to notify the Federal Aviation Administration's Regional Office for Northeast OH. When contact was made with the FAA, which is at the base, the controller on duty stated that he had no visual or radar on anything with in a 60 mile radius of Youngstown.

Just to give everyone an idea of where the Youngstown/Warren Regional Airport is. It is located off of Interstate 70 between Youngstown and Warren, OH. The Air National Guard base in question is on the same premisses as the airport.

At the same time that the call came was placed to the FAA Tower at the airport, an officer from Howland Township and a security guard at the base also had visual on the object from where they were at. It just so happened to be that the officer and the security guard were standing next to each other when the both of them had visuals on the objects as well. Then if these two men also had a clear visual on the objects. Then why did the operator in the control tower at the airport state differently?

What is not widely known about this, is that a news reporter from WYNT-TV 33, out of Youngstown had been made aware of the ufos being seen in the area due to several phone calls that had came into the television station reporting the objects. It was then that the reporter decided to investigate the incident. When investigating, she had discovered that after the sightings had ceased, the controllers that were on duty at the time of the sightings had been transferred to other airports in the area. This reporter was also heard on the 911 tapes on the events of that December night inquiring about the ufo situation that was going on. Also, this reporter was aware of both the security guard from the air base and the officer from Howland Township both having visuals on the object.