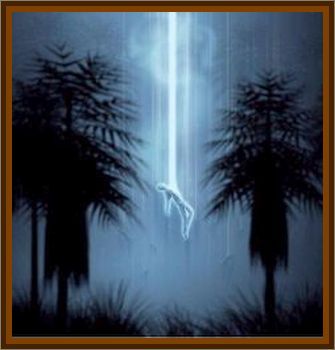 38 year old alien abductee Betsy, pseudonym, lives on a farm in the central hills of Puerto Rico, and she can look down and see the cruise ships coming in.

Beginning at babyhood she has had many episodes with the alien entities who take her. Betsy described the alien visitors this way:

I have been visited all these years by two type of entities. The little ones are like 3' tall and their heads are not so big as the Grey kind, and they have little eyes, noses and a mouth. They have peach/ivory skin and long segmented necks. Their body is short with long fragile arms and legs.

They preform a lot of examinations. They inserted something in my nose and left it there and I couldn't get it out.

The other day they put in the palms of my hands some big black needles that I tried to take off but couldn't.

When I am paralyzed they screw my head around and it hurts a lot. They have put me face down on a table and it feels like a thousand needles in my back. I scream but no one listens to me. Once I was sucked into this big tube that had glowing inscriptions on its walls. Next morning I had a bad burn on my breast.

Not all my experiences are bad. Once this little one came out of my closet, stood by my bed and asked me to leave with him. He took my hands and led me to the closet and rubbed my hands and I rubbed his. He asked me to go but I said no, then he disappeared.

They don't have any clothes on, and move slowly with caution and observe a lot.

Other entities take me to beautiful places with several moons, a beautiful sea, and vegetation. I felt secure with them. They were over 8' tall, and wore long white robes. Some had blonde hair and the one who teaches me had white hair. He looks like us, but he is some kind of an old man.

In the past month I have been contacted by entities who looked like the Nordic ones but they have different hair color like reddish and some darker. They look like humans but are bigger and they have only 3 fingers on their hands.

They dress like a Star Trek series and if something needs healed or fixed they stand up, raise their hands to their chests and began to say something like a prayer or spell and a fluorescent green light comes out of their hands.

I don't have bad experiences with them. They are kind and protect me. They show me things like the Nordics do but these ones are more lovely and respect me so I feel important to them.

Abductions in The Virgin Islands

Thalia, another amazing abductee in The Virgin Islands.

Thalia is a good looking 32 year old blonde of Scotch/Irish ancestry. She is a free spirited gal having traveled to Africa, Central America and other places. She has had many contacts with the Nordic types and has named her Nordic guardian, Alex.

Thalia has also had episodes with other aliens she calls the bad ones. Just recently she was attacked by a short hooded Reptilian with evil ideas but she broke his mind hold and grabbed a machetti she had in her bedroom and swung it at him. He instantly vanished. She then ran screaming out into the street at 3:00 a.m.

Thalia has also been the target of 6' tall hideous dark alien entities who are much uglier than even a Reptilian. They move extremely fast and she cries out for her guardians who are nowhere to be seen. Later Thalia wants to know why and the Nordics just stare at her.

In one memorable encounter with a giant Nordic, the Nordic got down on his knees and held out the open palms of his hands to her. Thalia has a magical association with this Nordic group and it originates back to other dimensions and times.

They tell Thalia to sing when confronted with danger. She tells them they are nuts and why didn't they just get rid of the evil black forms themselves? She never gets an answer, they just stare at her blankly.