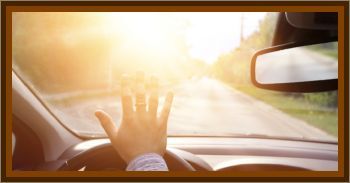 It was triangular in shape, massive in size and eerily quiet. I was a State Trooper working the night shift and was patrolling US83 south of Canadian, TX. It was around 10:30 p.m.

I always had a citizens band radio on and had been listening to two truck drivers enjoying a conversation. It was an unusually warm evening for a winter night and I was wearing short sleeves and had the car window cracked a bit as I slowly patrolled northbound. As this is the Texas panhandle area, the land is fairly flat, but with some rolling hills every so often. I could see the two trucks ahead of me and all three of us were driving north. The two trucks were approximately 1 to 1½ miles ahead of me. As we neared the Washita Creek bridge on US83, the road dipped down into a little valley.

I lost sight of the trucks as they dipped lower than me. One of the drivers was talking away when he suddenly stopped and said:

What the hell is that?

I heard the second driver say:

The radio was silent for a few seconds and then I heard the second trucker say:

I nearly ran into you when you stopped. Are you pulling over?

To which the other trucker said:

By this time I was starting down the incline toward the creek and I could see one truck stopped and on the side of the road and the other pulling past it to park in front of it. I still didn't know what they were talking about but started slowing down. I crossed the bridge and at that point, I saw the driver of the truck just in front of me standing in the middle of 83. He was looking west and upward.

This was the first time that I realized a very bright light was shining onto the ground from what appeared to be a very large dark object which seemed to be about 1,000' in the air and maybe a mile and a half away.

I remember thinking this because I'd been down the dirt road that runs from this location west and was fairly familiar with the topography here, and I could make out it was over another hill. I was afraid I'd be run over from behind so I started to park my patrol car on the shoulder beside the first truck.

I could see the second driver running to the first one and pointing at the object.

At this point, a small passenger car topped the hill just north of us and started slowing down, probably from seeing the two trucks and my car parked there. But as the car passed by I saw the brake lights come on and the car slightly screeched to a stop right in the middle of the south bound lane.

There was a female driver, and she stepped out of her car, right foot still inside but standing outside the car, and was looking at the object. I asked her to quickly move out of the road. She turned to me and said:

I told her I didn't know, but to please move. She did so quickly and then came back to us.

Now there were the two truckers, the lady and myself standing on the shoulder of the southbound lane. I couldn't hear a sound from the craft but could see a immensely bright beam of light shining straight down. The light didn't sway back and forth like a search light or anything, it just shone straight down. Suddenly I was aware of the fact that the object appeared to be moving toward us very slowly. This was because I realized the sheer dimensions of the craft.

It was a moonless night, or as best as I can remember it was moonless. Thousands of stars in a totally black sky made it very easy to see that the object was indeed moving toward us. It was triangular in shape. That was obvious almost from the start. The point was forward as if you'd imagine a triangle being mobile and one of the points being the front of the object. Again, there was absolutely no sound coming from the craft. Not even a whisper.

I realized no one was talking, I think we were completely awed by what we were seeing. After around five minutes, the object had gotten to a point that I felt it was within a mile of us. I still had the strong sensation that it was higher above us than it appeared. That's when the bright light simply shut off and it was easier to see the outline of the craft.

The mere size of the craft was incredible. If my references are even near what I think they are, I'd estimate the size of the craft to be at least 1000' per side. It was massive. The reason I use this word is two fold. One is from the dimensions of it. But the other is this. As the craft neared being almost directly over us, I remember feeling weight, felt something heavy on me. It also seemed as if there was a haze around the object, just barely off of the surface that seemed to make the stars near the edge flicker before they were occulted by the object itself. I also remember realizing I was holding my breath.

And although we couldn't hear anything, one of the truckers said:

Do y'all feel that?

It felt as though everything, the road, the air, us, everything seemed to be vibrating.

Up to this point, I don't think what I felt was fear, just amazement. But when the craft was directly over us, something happened. I was staring straight up at it, and I remember at this point that the women started sobbing and ran away to her car. She left before I ever said another word to her.

The object was black. Much blacker than the sky. This may have been an illusion from all the stars in the background, but it was darker to me. But as I looked up, I suddenly saw a circle appear, just forward of what would be the center of the object. This circle didn't light up. It became darker, as if there was absolutely no light shining from it or reflected from it. Without a doubt it was darker than the rest of the craft.

The craft literally stopped directly above us.

One of the drivers asked me if I should call for help. I told him I didn't know what I'd say. The thought did cross my mind, but I was thinking they'd be thinking I was crazy back at the Sheriff's Office.

The craft then started pivoting above us, with the point moving clockwise in relation to me until it was pointed in a generally north west direction. Then it began moving again.

I remember hearing one of the truckers talking, but my ears felt as if they were going to pop.

Again, there wasn't a sound from it, but a tremendous feeling of weight or pressure, sort of like when you dive deeply into the water. That kind of feeling.

As the craft moved off slowly, one of the drivers said something about driving to the top of the next hill to see it more clearly. He started to turn away and at that moment the craft sped up noticeably, then shot off to the northwest in a matter of 3 or 4 seconds.

The drivers asked me what we should do, and I told them I didn't know. I don't know what we saw, what we experienced. One of the drivers, the one that said he wanted to see it from the hilltop, ran to his truck and drove north. I ran to my patrol car and got in, passed him on the way north and pulled over at the top of the rise.

We all got out again but couldn't see anything. I remember my ears were ringing like mad. Looking back, I think this was side effects of an adrenaline rush. I've been in shootings, high speed pursuits and numerous other tension filled moments and I always have that reaction.

After some time, we all got in our vehicles and left.

I went straight home. I undressed and took a shower. I still could see the object in my mind, and am absolutely convinced about the darker circle inside the craft.

I then sat down at my desk in the study and sketched out the craft on a piece of paper. I then went into my bedroom where my wife was asleep.

As I lay down, she rolled over to kiss me goodnight but stopped and asked:

Have you been fighting a grass fire or something?

I said no and asked why. She told me I smelled like burned grass or hair. I told her what I'd seen just an hour earlier. She knew I was sincere.

The next morning, I got out of bed and walked into the bathroom. As I looked in the mirror, I saw that my face looked like I had a very light sunburn. Not deep red, just a little blushed. I looked down and most of the hair on both arms looked as if I'd been singed with a flame.

I called my wife, and she came in and gasped at how I looked.

We looked in the bed and there was a mass of burned hair on my pillow and the sheets.

I say burned, I mean it was very brittle and it and I still smelled like I'd been fighting a fire.

I still see it in my mind and I sometimes dream about it. I've never told anyone other than my dearest and most trusted friends. I have no doubt that what I saw was real. I have no doubt that it was huge, it was manned, and it was being intelligently operated. I'm not assuming anything...that it was an alien craft, a military craft or whatever. But what I saw moved with great stealth when I first saw it and was able to reach an unbelievably high speed in the blink of an eye.