UFO Observed While On Troop Hike 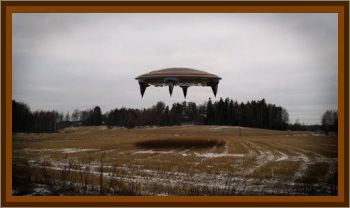 I was on a midnight hike with members of my scout group, in the region within an hour of Dover A.F.B. where we usually had our large, lengthy scout outings. Can't recall the exact area, but we were from Dover A.F.B. and I recall several outings where troops of other scouts used the same site.

Our troop consisted of all Air Force Base personell dependents, so we were all intimately familiar with the sights and sounds associated with aircraft and support equipment.

As we were hiking the object approached from behind, 4 or 5 stories in height above us, silently. It stopped above us and slightly ahead of our path. Everyone with me turned and ran back to camp, which was a distance away, as I believe we had been hiking about a half an hour.

I was fascinated with it and stayed and watched it. It was a mechanical object, with clear textured details on it's dark grey surface of lines and fixture details you typically see on well represented craft in most scifi craft we depict today. I would guess it was about 40' across. The center of it's circumference was about 5' to 10' in height, and was lit with multi colored light banks, that rotated around it's circumference. I recall white, orange and green lights in equal rectangle sizes. I vaguely recall a bank of clear window like details above, but I can't remember this detail for sure. Absolutely silent and with no discernable affect to my position, such as temperature or wind variance.

It was a still summer night, and I am guessing at the month, and may be off by a year at most.

It began to slowly move away and I followed on foot until, shortly it quickly, silently sped away.

I returned to camp, to a group of very distressed friends. I was in 6th or 7th grade.