Lights In Sky, Mars Brightness,Seen Several Nights In A Row 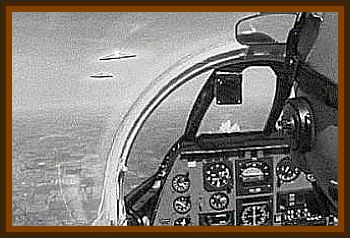 After finishing a graveyard shift, a number of other airmen and myself would often hang out at the basketball court at the 6930th RGM at Wheelus AFB in Tripoli, Libya.

One such morning I looked to the north and saw a light sweeping across the sky with a very slight undulating path. I pointed it out and we all speculated what it might be, this was a bunch of pretty smart guys due to our mission. We discounted inversion reflections, F-86D with afterburners, meteors, and there were no satellites yet.

While speculating, here comes another one. Well for three nights in a row, we saw 4 to ten in one night. Although they were coming from different parts of the northern horizon, they seemed to vanish pretty nearly the same place on the southern. As determined by a fiducial point, an antenna. The path, when checked on a map, was straight across the Libyan desert crossing the Tbilsi Mountains.

I did talk to an airman at the AC & W squadron, radar, after hearing the F-86D's scramble obviously in response to these odd lights.

Oh, Yeah. We see these all the time.

And quoted a speed I can't remember but was very fast.It was odd to scramble jets at that time of the morning unless it was for an earnest cause, the officers do like their sleep.