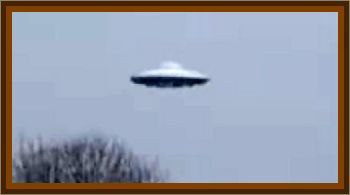 The Brazilian Navy ship Almirante Saldanha was docked off of Trindade Island around 700 miles from the coast of Brazil. Carrying a full crew including a number of scientists and military officers, the Almirante Saldanha was preparing to set sail when Air Force Captain Jose Teobaldo Viegas saw an object in the sky.

According to reports, Viegas wasn't the only man to see the object at that moment and it is understood that a number of people corroborated the report of an object in the sky with rings around it.

The sighting of this UFO and the events afterward have grown to create one of the most controversial military sightings in history, with many believing it to be an elaborate hoax.

Upon sighting the object, Jose immediately sent for nautical photographer Almiro Barauna who was part of the Almirante Saldanha's scientific operations that year. Barauna was able to capture the objects in a series of images and, in a 2010 report, made the following observations:

Instantly, everybody who was in the deck, some 50 people, started to see a strange, silver, saucer shaped object moving above the sea towards the island. The object didn't make any sound, was shiny and sometimes it moved quickly, then slowly, up and slightly down and when it accelerated, it would leave a white phosphorescent trail that would disappear shortly.

In the report, Barauna goes on to state that some of the crew who were stationed below deck reported significant electrical interference throughout the duration of the incident. It was also reported that after the ship set sail there were continued malfunctions with her electrical equipment.

As intriguing as Barauna's report is though, it is his images that remain at the center of the incident and all of its controversy.

Barauna stated that he developed the photos shortly after the incident occurred, and they were eventually analyzed by the Brazilian Navy's Aerial Reconnaissance Laboratory. The test concluded that the images were indeed genuine and all objects contained within them, real.

So why is the Trindade Island incident such a controversial one? The controversy stems from the fact that the majority of 3rd party investigations into the incident have concluded that the images are indeed a hoax. Despite endorsements from the Brazilian President and testimony from senior officers on deck at the time, many experts are able to find holes in the story, namely the length of time that Barauna had the negatives for before the tests were ran.

But it is this controversy and lack of conclusive evidence for either side of the argument that has led to the Trindade Island Incident's place in ufology legend years afterward.