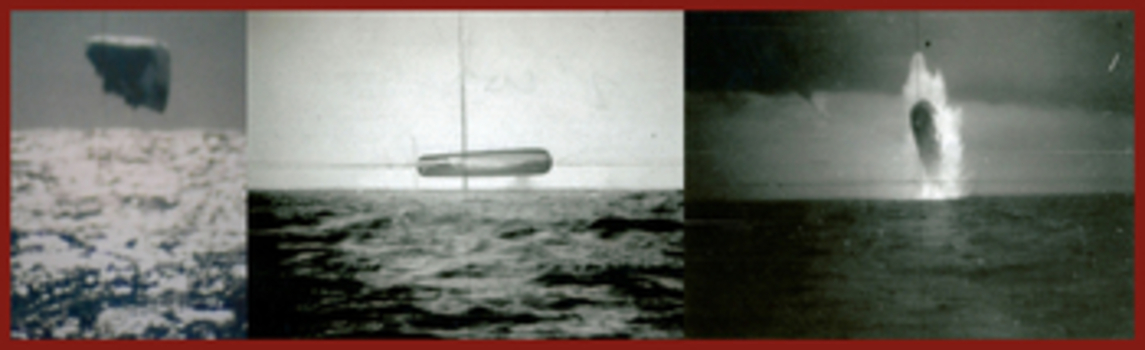 UFO enthusiasts and researchers are claiming that a set of U.S. Navy photos taken in the Arctic region in 1971 show a large alien UFO flying over Arctic waters. The emergence of the set of photos has generated some excitement in online alien and UFO forums, with many declaring that this could be the definitive proof of alien UFO presence on Earth.

The images shown here are believed to have been taken in March, 1971, from USS Trepang SSN 674 submarine, during a voyage from Iceland to Jan Mayen Island in Norway.

The location was between Iceland and Jan Mayen island in the Atlantic Ocean. Jan Mayen belongs to Norway, and is only inhabited by the Norwegian Meteorological Institute and the Norwegian military.

The submarine came upon the object by accident, as they were in the region on a routine joint military and scientific expedition. Officer John Klika was the one who initially spotted the object with the periscope. This obviously implies that it wasn’t ours, and unfortunately doesn’t explain the different objects seen in the pictures.

It is unclear whether the images are of the same UFO, but alien and UFO enthusiasts believe that they are evidence of alien presence in the Arctic region at the time. Some UFOlogists have speculated that the aliens were probably hunting for oil in the region.

However, some experts believe that the photos only give evidence that the U.S. military was secretly testing aircraft in the region. Some commenters have pointed out that the supposed cigar shaped UFO looks remarkably like the Aereon 26, an experimental aircraft that was being tested in the early 1970s.

According to individuals who saw the images after they were first published by a French paranormal magazine. One person said he obtained information from privileged sources that the pictures were taken from the U.S. Navy submarine USS Trepang SSN 674 in 1971, and that the commanding officer of the submarine at the time was Dean Reynolds.

U.S. Navy records confirm that USS Trepang was indeed, in the Arctic region at the time, and that Rear Admiral Dean Reynolds Sackett, Jr., a native of Beatrice, NE, commanded the ship from August, 1970, to December, 1973.

The photos were classified Top Secret at the time they were taken. One of the photos was inscribed with the words, Official Photograph. Not to be Released. CT. Another photo was inscribed with, Unauthorized Disclosure Subject. Security Certificate SSN 674. Criminal Sanction.

An online debate ensued whether all the photos were of the same UFO, and at least one UFO enthusiast proposed that the images were of a single shape shifting object.

These look like the real deal. Possibly a shape changer which accounts for so many, yet actually a single object.

Some UFOs can function through and under water quite well.

Commenting on the images, a UFO expert, noted that airship or cigar shaped UFOs have been spotted in many parts of the world since the late 19th century. One of the earliest notable sightings was during a polar expedition in 1908. And Accordingly, the frequency of sightings in the Arctic has led to speculations that aliens have a UFO base in the Arctic region.