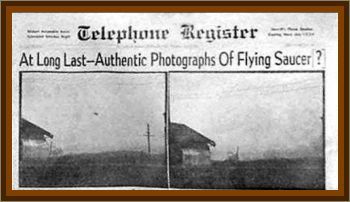 Two of the most notorious UFO photos of all time were taken on an Oregon farm by a farmer named Paul A. Trent. Beyond many such cases, these photos have withstood the test of time, through generations of researchers. It could be said that this case specified the boiling point for the heated ongoing debate over what qualifies as physical evidence, at least when it comes to the subject of UFOs.

Mrs. Trent was outside feeding her rabbits, when she noticed the large, disk shaped object approaching from the northeast. She called out to Paul, who joined her to look at the object. He then went back in the house to get his camera. He got back out and picked a spot to stand and took the first picture, then wound the film for the next picture. Typical for cameras of the era. Several minutes later, he took the other.

In the meantime, Mrs. Trent called out to her inlaws on their porch, about 400' away. They didn't hear her, so she ran into the house to call them on the telephone. Mrs. Trents mother in law didn't get to see it because it disappeared by the time she was off of the phone, but her father in law did catch a glimpse of it just before it disappeared in the west. Paul waited to finish the roll of film before he got the pictures developed. They were displayed nearly a month later in a local bank. A reporter named Powell, who worked for the McMinnville Telephone Register, saw the photos and convinced the Trents to let him publish their story and photographs. However, it did take a bit of coaxing because they feared they might get in some kind of trouble with the government.

The photographs and story wound up in the June 26, 1950 issue of Life, who borrowed the negatives from Powell. The Trents didn't get the negatives back for another 17 years. They were requested for examination by the Condon investigation in the late 1960s, and after that analysis was done, they were finally sent back to Mr. Trent.