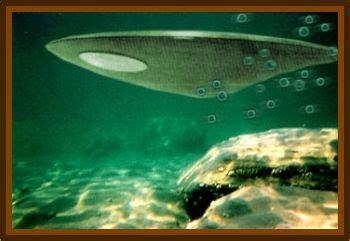 100 miles off the northern shores of Puerto Rico lies the deepest valley in the floor of the North Atlantic Ocean, the Puerto Rico Trench. It is a crescent shaped formation 1,090 miles in length and 60 miles wide formed by shifting plates in the Tertiary period, 66.4 million years ago. Part of this trench is known as the Milwaukee Depth, so named after the vessel which first measured it,and descends to 27,493' below sea level.

In 1963 the United States Navy had a fleet of ships, submarines and aircraft off the coast of Puerto Rico performing training in antisubmarine maneuvers, with the USS WASP - CV-18, an aircraft carrier, serving as the command ship. During the exercises the vessels detected an unknown sonar target moving in the area. One of the submarines moved to pursue and investigate. The submarine could not catch it. For 4 days the fleet tracked the unknown object and recorded that it moved at more than 150 knots, 170+ mph, and descended to over 27,000'. The fleet communicated this encounter to their Naval base at Norfolk, Virginia. At the time of this incident, the top speed of submarines was 45 knots and their greatest depth 3,000'.

There is nothing in any naval inventory anywhere in the world that can approach anything remotely that speed, then or now.

Communications were hindered by the fact that each of the warships was trying to advise the Wasp of the strange event. Thirteen captains would enter the incident in their ships logs.

Even more strange is there’s been a tremendous surge of UFO sightings in Puerto Rico since the early 1990s. And for many of the Puerto Rican witnesses, they’re absolutely convinced that there’s some sort of massive futuristic installation deep below Puerto Rico, under the ocean bed.