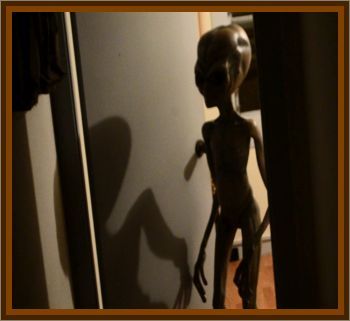 John Trasco, claimed he went outside at dusk to feed his dog and saw a brilliant egg shaped object hovering in front of his barn. He was confronted by a 3' being with putty colored face. It had a nose and chin and large protruding frog like eyes.

Trasco said he thought he said, in broken English: We are peaceful people, we only want your dog.

To which he, thoroughly frightened, replied: Get the hell out of here.

The creatures then fled into the object which took off straight up.

Mrs. Trasco also claimed she saw the object from inside the house, but did not see the little man due to some shrubbery near the house, although she heard the voice, and heard her husband’s angry command.

It is not known if certain details were ever cleared up, and were mentioned only nebulously in the Delaware Valley News on November 15. One of these questions involves whether there was more than one entity, for Mrs. Trasco is quoted as saying that her husband tried to grab one of them, and got some green powder on his wrist which washed off. He also found some of the green powder under his fingernails the next day.

The little man was dressed in a green suit with shiny buttons, with a green tam-o’-shanter like cap, and gloves with a shiny object at the tip of each.