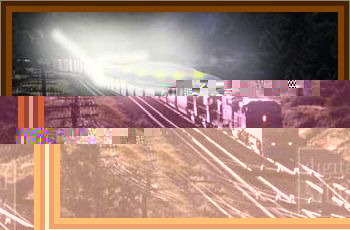 This incident occurred during the massive sighting wave of 1973. A conductor on a L&N train and had just had an encounter with a UFO at 6:50 a.m. To be precise, it was at a point on the tracks near St. Phillips, which is about 8 miles east Mt.Vernon. The original train crew had experienced engine trouble near Upton, a little town 3 to 4 miles northwest of Mt. Veron. One of the rear diesel units had been overheating and the Burlington engine was pulling a 6,000 ton load, overloaded under these conditions. The maintenance man at Upton was a 30 year man and told the conductor that the rear unit was dead and that there was, in his words, no use messin' with it. He'd already tried. In any case, the new crew lumbered in to Mt. Vernon, taking 20 to 25 minutes longer to get there than usual. The sky was clear, temperature was a cool 55°, wind was calm. Again, it was about 6:50 a.m.

They had gone through Mt. Vernon and were nearing the Lamont crossing, 2 miles east of the city, heading east for Evansville. The sun was just barely peeking over the tree tops. The men in the front engine saw a very bright, but distant, light in the sky coming out of the north. At first they thought it was an aircraft, then later decided that it couldn't be. The object was very bright and was tracking north to south, pulsating from real bright to dim to bright. The distant light appeared to travel a short distance, 50' to 60' between pulsations. The light finally turned more east towards Evansville and disappeared.

When they neared Caborn, 6 - 7 miles east of Mt. Vernon, the lead conductor told the rear conductors by intercom that they had seen a real bright light. When they got near St. Phillips, the rear conductor reported that there now was a train following them, on the same track. By then they had gotten up on Belknap Hill, at Peerlsess Crossing, a pretty good pull on a train, and had gotten hung up. One of the rear men suggested that they should get the train behind them, which he said had been following them for awhile, to push them. The lead conductor replied:

Well, I haven't heard him on the radio.

After a short while the rear man suggested the same solution to the problem, again:

Well, he's been following us and I can see his light back there and the board is red!

The object following them had given them a red signal on their blocking system. The signal referred to here is a series of lights, similar in color to regular traffic lights, situated on a pole on the side of the tracks. This shows either red, green, or amber, indicating danger, all clear, or caution, respectively. This signal is a part of the Automatic Blocking System which tells of other traffic on the same track. The red board normally meant that something was on the track behind them. The rear conductor again suggested that the crew call the tower, Howell Round House at Evansville, and see if there was a train behind.

A quick check with the yardmaster showed that there was no train behind them at all. Upon receiving the news, the rear conductor replied:

There is a headlight behinds us. I can see it. It's real bright.

After the train had gotten hung up and had stopped on Belknap Hill, they got out and looked around. The conductor, after backing the train down the hill, got out, walked down to the rear unit and pressed the restart button. To his surprise the unit kicked right off, ran real good. The light or the object was now moving off, back from where it had come from. According to the conductor, whatever had given them a red board, now was giving them a green board. As he, himself, stated:

The board went green. The light cleared up the board.

The train, previously hampered with a bad rear unit and way over tonnage, was now fully able to climb the steep, hill and made it in to Howell without further mishap!

What makes this case interesting is in this detailed report something very bright was first seen, then a similar bright light follows a train, a diesel. Tractors and other diesels have been virtually unaffected by UFOs. The Blocking System reacts as the object approaches and recedes, just as if there was a train on that track. The train, originally disabled now works fine even with over tonnage when the UFO is out of the picture. All this during a massive sighting wave with some of the best close encounters we ever recorded. And that's not all. The crew was reprimanded for filing a report. Later we found that the engine had been pulled and taken down south to be studied and reportedly the U.S.A.F. was involved.