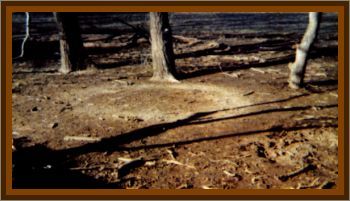 A farmer was getting ready to leave his home when he saw an orange colored ball arrive and land on the ground not far from him. He approached the object and saw that it was a dome shaped disk with a flat bottom, and it emitted a blinding light which illuminated the field for about 200 yards around.

The craft appeared to be translucent, and a dark shape could be seen silhouetted inside it. For approximately 10 minutes, the witness watched the thing. Suddenly the color of the object changed from white to red and it took off and disappeared into the north at great speed.

After the thing had left, the witness went to the spot where the craft had been and found a sort of luminescent stream that was falling to the ground. He watched for a while and then went home. When he arrived there and took off his jacket, he found that his clothes were covered with a layer of white, somewhat sticky residue, not unlike paraffin, which soon disappeared without leaving any trace.

This particular phenomenon is very similar to the substance called angel hair which has been seen streaming from the objects in flight. It usually melts when it comes into contact with heat, and this may be the reason for the fact that the witness in the Meral sighting did not discover any of the stuff on his face or hands. His body heat would have dissipated it as it came into contact with his skin.

A pilot driving through the desert and bound for Nellis Air Force Base experienced a sudden and inexplicable engine failure. He tried to start the car with no success, then started walking. He saw a strange shape at the side of the highway and, being curious, approached it. To his surprise it took off. Before it left, however, he got a good look, it was circular and disk shaped with a dome on top. When it took off, he clearly saw three circular appendages underneath. The pilot went back to his car which started with no trouble. When he reached Nellis, he reported the incident to intelligence and he and one of their officers immediately drove back to the scene. On the ground at the location of the sighting, they found three clearly defined concave impressions in the sand.

Before this sighting was over, the object, which ultimately chased a jeep load of people for approximately a half hour, had made a couple of landings. On the last of these landings, before leaving the area, the object left an odd, luminous haze floating in the air where the object had hovered. The observers stayed and watched the material slowly dissolve in the faint, warm wind blowing from the north.

A great deal of excitement was generated in the community when a group of frightened teenagers came within inches of a spaceship.

Jack Stephens, a very trustworthy young man according to his parents and teachers, said the party of five had accidentally stumbled upon the object, complete with portholes, as it rested on two ballshaped landing gears in a field outside town.

Additional proof of the incident came after an analysis was made of the scorched earth discovered on the spot. Paul Hartman, a writer for the Galt Reporter, says the change in soil composition at the site was incredible. Topsoil dug up from the landing area glowed in the dark. Also, when grain samples from the burned patch were studied under a microscope, it was found that they were healthier and sturdier than the samples taken from elsewhere in the field. Finally, the insects there had undergone a certain instability and peculiarity in character. Ants, where the saucer had touched down, were larger and stronger looking than their counterparts in untouched areas. The ant hills themselves, according to Hartman, were much higher than usual and a spider which had accidentally found its way into a jar containing soil from the Galt UFO landing site, had grown to about 10 times the normal size for this particular species

A family was held under siege by two disks giving off light beams which heated up their house. Activity was taking place at the railroad tracks about a half mile away, where a lighted object could be seen. At the conclusion of the incident, in the area where the two closest disks had hovered, there remained a misty, smoke like deposit for several minutes.

Another landing took place near a farm outside Beausejour, Manitoba, about 45 miles from Winnipeg.

A farm woman, who requests anonymity, was sitting on her front porch at 11:30 p.m. waiting for her husband to come home. She said she saw a brilliant red light with a smaller blue light beside it come toward her from the south.

It illuminated the ground and appeared to land, whereupon she became frightened and went into the house. The next morning, she and her husband investigated the area where the object had apparently landed and found a semi circular area 30 yards by 50 yards in flames.

The strange aspect of this case is that on the 15th of June, the area was still smouldering despite the fact that there had been considerable rain in the interim. Soil samples taken at the site yielded nothing.

On Route 31 near the Depot Road area in Coventry, a motorist sighted an orange ball of light which appeared to be hanging from a tree. The driver immediately drove into Coventry and notified the police, but by the time officers arrived on the scene, the area was deserted.

After receiving the full report from the police, a field investigator examined the area and found a grassy spot which had been swirled flat as if compressed be some rotating force just a few yards off the road from the point where the ball of light had been seen.

Another such nest was found by Ronald E. Januzzi, a mineralogist of Danbury, near his museum on the Danbury-Brewster highway. It was found on the morning of the 9th of January 1967 and was considered to be too large to have been caused by an animal, however, no UFO was seen in the vicinity which could be linked to the spot.